Out of the 5.000 (+ innumerable) years old zodiac of the year on which we all could and should unite 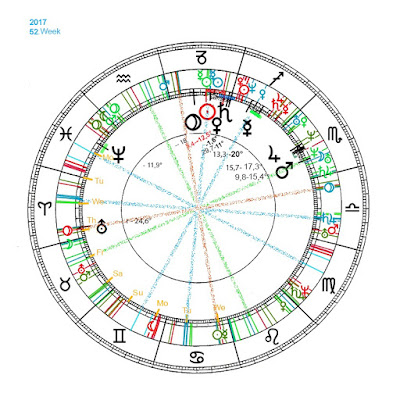 and in the post-gregorian world of the west the short bright days inclined
to the  long Christmas-Eves, the feast for the children originally ...

This diary can only be written out of mundo's ascendent in the way of Moon which is Cancer = welling in the unobtrusive way of Sun in Pisces, swimming in the depths
of the backgrounds.

And with the Sun in Pisces the author swimms in the 10. house = in the non-temporal
yardsticks of life, meaning a life in one of the 'tents' in the village, and nothing else, in other words among the 'gods' of God, of which the Psalm Nr. 82 talks

No sign is more receptive for the light of order, than the nocturnalmost,
has more capacity for light than the darkness.

And that has Mundo together with a twelfth part of all Cancer-ascendants:
Moon as ruler of Cancer in Cancer
and of these he shares the half part with Moon in the 1. house
of the two possible parts Moon in Cancer
= a 288th part of mankind 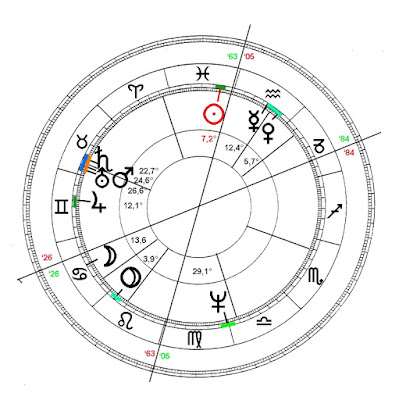 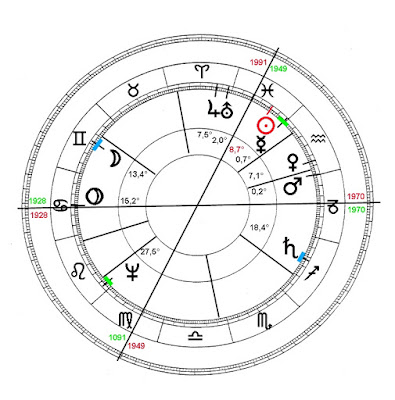 ... makes together in the statistical normal distribution: each 13.824 males on the planet
there is one with the 'coarse structure' like Mundo.

If one takes one's fine-structure of the horoscope, a rare complex, e.g., like in mine,  the Saturn + Uranus + Mars of February 26. 1942, then the horoscope gathers a nearly infinite originality in still exactly defined rareness.

This proves, nature is no statistical chessboard, but a gatheress in complexes
= nature is contour, ist work of the archetypes at the contour of the living.

This is spreaded here  so personly  now of all times, to show the way,
how, carefully calculated, the coarse structure of each unique individual
is to be gained, beginning with the 'deep forgotten' ascendant (which was never conscious)
as the root of the entire person, it's abilities and it's fate
to the ruler of the ascendant
to the sign of the Sun to the housde of the Sun

In case of Cancer the receptivity for the 'light'
signalized by the darkness of the 'feeling-function' (Jung) in the zodiac.

in the sky the flying black
craw craw

Out of the 5.000 (+ innumerable) years old zodiac of the year
on which we all could and should unite
talks in the 2. house of my person
Pluto = astrology
= daily contemplation of the swift and slow gyrations
which had 1942 in the fourth of 26 years
thrived in the gold of Leo

but no one (today) tells that to anyone in school ...

we 'animals' with our invisible character
and our forgotten innocence
let's check in into the weekly zodiac
and let's read the message of this week:

Aries: Outbreak of energy
in the Scorpio-cristal of the soul
Mars in Scorpio
and the god-man in us
Uranus in Aries
permeats through the gap of beginning

Taurus: Aggregation and storage
in the pneuma ruling above the borders
of the temporal
Venus in Capricorn

Twins: Distinction in space
again ahead in the counter- curve
once again in the perception of the entirety of conceptions
Mercury in Sagittarius

Cancer: Commitment to the interior
from the depth to the width this week
Moon from Pisces to Twins

Leo: The Externalization of one' own
in the spirit above the borders of family
Sun in Capricorn

Virgo: The prudence of life
once again in the perception of the entirety
of time
Mercury in Sagittarius

Libra: The invitation into the form of life
in the spirit above the borders of Eros
Venus in Capricorn

Scorpio: The readyness to accept form
further on in the high spirit of Capricorn
where the sacrificer Pluto always
governs the paradox together with
Venus, Sun and Uranus
the holy middle four

now Mars and Jupiter
the fighter and the uniter

Sagittarius
the setting into a harmonized gestalt
concilliation by the god of waiver
= Jupiter in Scorpio
till Nov. 2018

his year is 29, ... Sun -years
back home now with his resonances with
Aries
Cancer
Libra

no longer with
Pisces
Twins
Virgos

special in the week is:

next weekend Mercury visitting
blue Venus of the air element

and Uranus further lingering on the red Pluto
of the fire-element in Aries
with his decisive resonances in the socket ...


and next week's beginning has
Sun and Venus not only in the abstract cold
of thinking
or Capricorn
but in one of the new entered 29 years
each with
Sun , Venus, Mercury
in conjunction with Saturn at home
for one, two weeks ...
meaning: an extreme of disziplin for heart and storage
somewhere 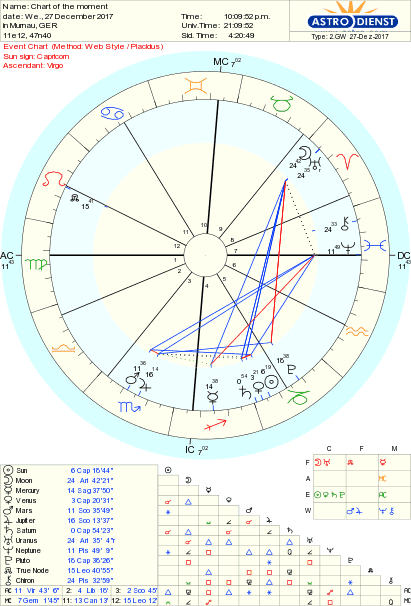