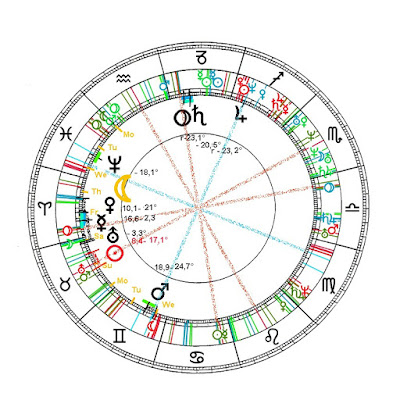 Older than breathing is the heartbeat, in which father and Mother have risen early ... the end has them close to another. The heart is living the secret of the Sun ,  constantly defeating the cooling als lord of the birthday.
But lord of the birth is the sign, rising at the eastern horizon while the first breath. With it starts the uniqueness of an individual by severance off the mother.

By the exact daytime of the birth Astrologers  find that of the 12 signs of time, which ia ascending at the horizon appearing ascertainable as matter below the horizon and invisibly  as spirit above it.

For both, heartbeat and ascendant the zodiac usually has two different signs, but about Sunrise it can be the same, which do define in most general form one of 12 ways of life.

The psyche of man 'phantasizes' these given ways of life, like it does in animals. In man psyche creates myths and symbols and basically the 'great rear-animals, which seemingly govern the world.' (C.G.Jung)

This astromundane diary routinely  rarely describes births and hence rarely ascendants, but
apprehends the distance in the zodiac, which our siblings of 'Sun's family out of us and within of us travel. Fix Sun appears by the way Earth is traveling around him in front of the visible background of the star-images and the invisible zodiac beginning at spring-aequinox with 0° Aries.

Instead of and individual ascendant the astromundane diary refers to the psycho/physical gestalt "Zodiacal man" as super-individual pattern and heir of the development of life from the beginning till mankind, each one being a pattern composed of the twelve patterns of the zodiac living unconsciously within us as instinct, soul and spirit, whose attendance depends on an ego (Ich) which is ready to receive it, which is "not ascertainable hic et nunc" (Wolfgang Pauli) but which is present in the fact, that the physical  and psychic matrix is identical." (C.G.Jung)

their domains
Twins and Virgo
as well as
Taurus and Libra
with all their heavenly guests
currently are succumbing  to a rather stupid spring
appearing in statures like the
clowns of Kiev and Caracas.

what it means? look for yourself
it's a stern pair of rulers
in the stern sign of Capricorn
aka state.

Pluto
the same of two
completenesses
8

at the same time
next Sunday it's heart's
day of mutation
when Sun will be united
with red Uranus
the divine toppler
of the fire-element of 1603
each year met by Sun at 14,2° Taurus
with the relieving prototypes 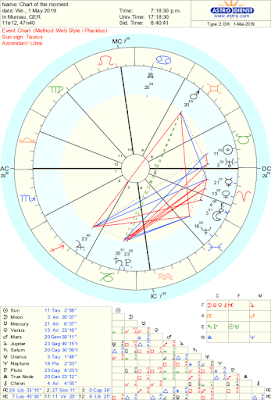