End and Beginning Challenging Heart of the Narrator 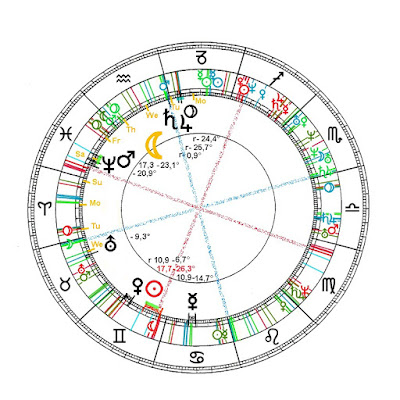 " The ability to let something arrive ..."
Two women  in conversation on their way in
the Kurpark in Murnau

My renewed world-distinction started with the more precise and intuitive observation of male and female traits, when with 39 I started to look at the entirety as an X, deformed by powerful interests. My observation since then was exclusively based on my own perceptions, added by authors like JÜNGER and JUNG and the astrologer DÖBEREINER. It was allowed to me by God, somehow newborn as a an 'adult child', as a kind of anonymous 'Indian', to invisibly go ashore in Europe, and since then looking what is going.

The American Poet Gary Snyder, to me a 'white Indian',  offered to me 40 years ago this:

"There are two ways of Earth-consciousness: one is called global, the other we call planetary. These two are standing 180° apart, although they superficially seen appear identical."Global consciousness" is that on the men of Technic/Utopia/Technocracy/Centralization in their busyness-suits, playing world-games with system theory, included are the planer of environment in the back-roomt of the Trilateral Commission. Planetary thinking is decentralistic, searches more for biological solutions then technical and find it's teachers for its alternative possibilities  in the traditional knowledge of the natural people of Papua and the source regions of the Amazon as well as in the libraries of the high occidental civilizations ...

"Planetary spirit" is the internationalism of the Old Ways, accepting the possibilities of the Earth in their manifoldness: global consciousness would finally maybe impose a not so well-wishing technocracy over all by means of a centralized system"


nature spirit-filled
shore entered
back from Turtle-Island
Internationalism of the Old Ways
the last 'Indians' in Europe
scooping off the old fathers
to unite nature and spirit
the alchemists and nature-philosophers
of the 13. -16 century
and the poets and describers like them
having died last week before years
+ 6. 6. 1961 C. G. JUNG
+ 6. 7. 1980 HENRY MILLER

among the poets I count the interpreters of the parables of heaven, finding the invisible attendance of gods in their casting of semen on the fields of time, which the astrologers behold as heaven like the beholder of the Sun light in Plato's allegory of the cave. The astrologer is consoled by the night-sky even though his contemporaries don't want to hear about it.
Being an amalgam of nature with our psychic projection,  the zodiac allows astrology to mirror the months of the year as the the outer in the inner  hours of the day. 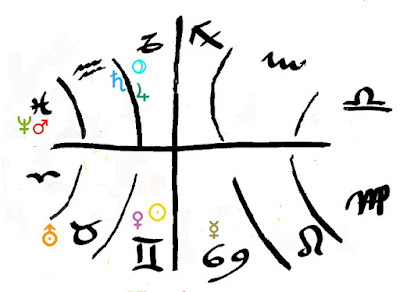 whose radiating center
has house and place
in each of us

a tremendous week hence, under and  above consciousness
however the visible heaven vouches to the astrological 'knowing' one
that such in the sky is mirrored  in the Anthropos in us
... without being introduced to our I

... and further that
all that finds it's precipitation
where Mercury
ruler of Twins
currently rules  in
the early middle of
Cancer

"The lapis ('stone of the sages' of the alchemists)
is indeed thought as unit and hence stands for the
'prima materia' anyway. But as  this is a piece
of original-chaos. [...] so the lapis also consists
of the four elements , respectively has to be
assembled  of these. In the chaos they are not
united, but only coexistent and therefore have
to be associated by the alchemical procedure.
They are even hostile to another and won't unite
voluntarily. They  hence display an original
conflict and  repulsion."

"God had to become man. The suffering of man
doesn't arise from his sins, but from him, who has
created him with his imperfections, the paradox God.
The just is the tool, into which God enters, for to
arrive to self-reflection and hence to consciousness
and rebirth as divine child, being entrusted to the
welfare of the mature man." 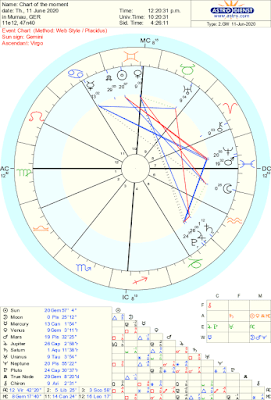