50. Week in the Mirror of Psyche in Matter 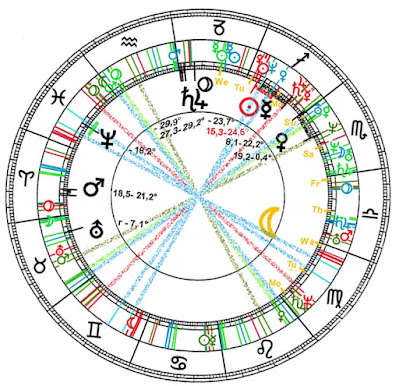 12. 7. - 16. 2020,  0:00 UTC
and under the northern Kingsconjunctions
of the four colors and elements
Fire, Earth, Air  and Water  of the years
1603, 1802, 1980 and 1305
under the Northern Zodiac
(click to enlarge)
threshold
"In a way not unwarranted we like to set consciousness
in analogy with the functions of the senses,  of  whose
physiology the concept of threshold is taken after all.
The  frequency of tone, perceptible by the human ear
reaches about 20 - 20.000 Hz and the wave-lengths of
the visible light reach from 7.700 to 3.900 Angström.
Out of this analogy it seems thinkable, that for psychic
processes there is not only a lower, but also an upper
threshold ... "
C.G.Jung, Theoretische Überlegungen zum Wesen des Psychischen,
(Theoretical Reflections to the Essence of the Psychic), Coll. W. 8, § 367
"Psyche to me is, as you know, a general concept, denoting
the "essence" of all  phenomena of the inner world. Spirit
however denotes a special sphere of this substance -
namely all that essences, which cannot be derived neither
from the body nor from the outer world"
Atom and Archetype, the PAULI/JUNG-Letters,
JUNG on 10. 24. 1953
"Psyche could be ordered in parallel to the physical  concept
of matter (particle and wave)."
ibd.
"(...) has the psychology as it's object processes, which are
simply indispensable (...) namely monitoring, thinking, and
realization. Due to the absoluteness of the psychic  proceedings
there cannot be only  o n e  access to the secret of being, but
there have to be at least  t w o , namely the material  events on
the one hand and the psychic mirroring of the same on
the other hand."
ibid.
(translations by me)
PAULI and JUNG share in their letters the realization of the mirroring of psyche in matter and - so JUNG - " At that arguably hardly ever will be distinguishable what mirrors what.".
In the Persian/Arabic Astrology of the 8. century the observation of the 'mirror-points' in the zodiac was common.
In the Astrology of Wolfgang Döbereiner in the early 1990th appeared the concept of rhythmical flow, emanating from the ascendant as psychic meaning - traveling the upper way and as material being  pacing the lower way, meeting each other  at the descendant and returning through the other half.
The mirror-axis was the horizon between ascendant and descendant - in the zodiac between 0° Aries and 0° Libra - as the horizon of consciousness with it's six mirrors of creation of spirit - upper - and matter - lower half . These two ways correspond  with the fact of the two natures of light, waive and particle. 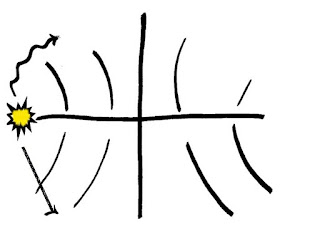 Due to the basic rule, that all in nature exists as opposite to something we have to conceive that males and females share the zodiac and the 12 houses of the way  in opposite orders:
male Anthropos 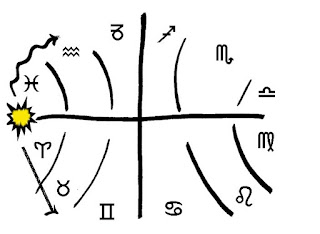 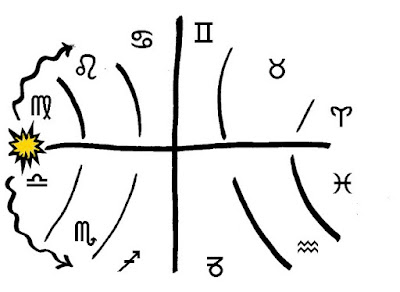 Sophia 50th week 2020
(you can print it and draw/paint the lights and planets of the day/week)
(also your Ascendant/Descendant/houses)
Now the 50. male week, we are currently 'vibrating' in,  according to the beginning of the circle of creation with light/fire/Aries 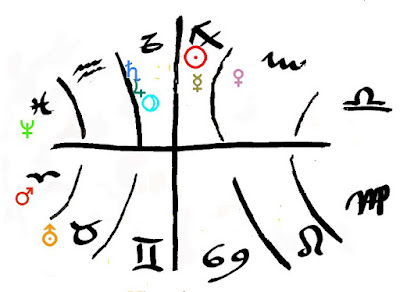 50. Week male
The mirrors of
the twelve part-personalities
of the 'complete man'
Anthropos'
unconsciously living
patterns
in all of us
no more happening is to be found  in the sixth mirror
in the fifth
Venus till next Tuesday
in the Scorpionic
waivers
preparing the arrows
for the quiver of the Sagittarius
and mirrored by
making heart
having got to play
Scorpio's
score
in the fourth
Sagittarius
in whose Spirit
arranging
happy coincidences to happen
according to the fatherly measures
granting longevity
in whose spirit
Sun and Mercury
currently
are sending arrows of insight
by
heart and brain
for the conciliation
of the living parts
with the eternal plan
to be
received by the feeling soul
down inside
of the inner rivers
The four Elements this week:
As readyness of the 'blue' Element air representing the bodyless ability of thinking, Venus of air and Neptune of air are waiting for Sun and Mercury.
yesterday
community of  Sun
with blue Venus
on Saturday
community of
Mercury with
blue Venus
of the air element and her
collections of symbolic thinking
Monday
community of  Sun with
blue Neptune
of the air-element
the spirit of innocence
And with the weekend waxing the 'resonances' of the square with Neptune will reach Mercury and Sun, brain and heart in Sagittarius, and the luck of the coincidence will reach
only those hearts and brains, that have left the cardinal sin of adult vanity.
Venus
rooting, socializing, balancing
in her last week
under Scorpio's
discipline and order
will meet on Saturday
the green Venus of water
the feeling element
and on Monday the blue Uranus of the air
the thinking element
and Mars
what does the pusher push this week?
last week of
lonely in the wilderness
of Aries
having to mirror
the spirit of gentleness
of Neptune in Pisces
while Uranus
the spirit of heaven
again tries to root
in the matter of
social instincts
while Venus
in Scorpio has got to overcome
Taurus'
instinct of collection
and Mercury
god of Twins
ability to discriminate in words and numbers
having to mirror
God
"In the beginning was the Word,
and the Word was with God,
and the Word was God."
John.1.1
in the discriminating senses
perceiving the world
and Mercury in Sagittarius
currently doesn't mirror
God
in the real-world of matter but
in the symbolic world of meaning
entering spirit in time as intuition
Murnau, 12. 9. 2020, UTC: 17:51.
Documentation: 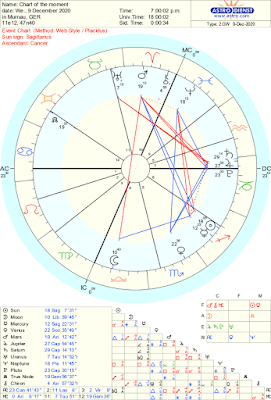