From Now On: Overthrow of the Traditional and Scale - Removal of the Stage for the Coming Play 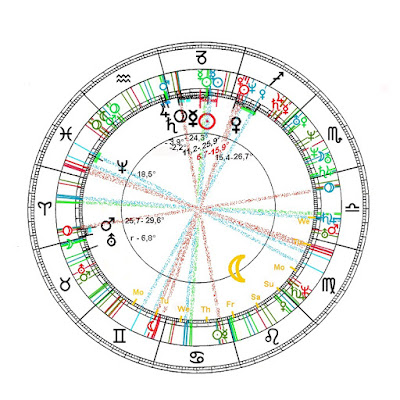 12. 30. 2020 - 1. 6. 2021  0:00 UTC
and under the northern Kingsconjunctions
of the four colors and elements
Fire, Earth, Air  and Water  of the years
1603, 1802, 1980 and 1305
under the Northern Zodiac
(click to enlarge)
Father + Son ~ Saturn + Jupiter
„…  has the father-imago a quite general meaning as logos
resp. spirit with the quite special feature of the fatherly.
The logos notoriously in and of itself is not necessarily
fatherly.  It also can, as we know, be son-like. In this
later case it lacks the fatherly quality. The son-like logos
is the generated logos, the fatherly by contrast is a
generating , fatherly cherishing and supervising one.
The son-like logos generally has the character of a  heroic
brusque confession, challenging the receiver to an equally
autonomous decision. The generating, fatherly however is
introduction, guidance, company, education.  It doesn't
explode like a bomb or like a fire-work, but takes the
ignorant or reluctant at the hand and leads him on a  sort of
secure way through the inhospitable darkness."
C. G. JUNG , Letters, May 10. 1932
„…  the fatherly feels to be responsible for comprehension,
it levels the ways to appreciation and looks to  guard  against
the evil results of  misunderstanding. Therefore it always
operates by a differentiated feeling-function, whose highest
virtue is human empathy."
ibid.
Saturn is the Roman heir of the Greek Godfather Kronos, who devoured his children immediately after the birth - only little Zeus escaped him, and,  grown valiant he defeated his titanic father, liberated his godly siblings out of the belly of the father and him with his titanic siblings he banned into the dark Tartaros in the inner Earth, and became father himself. So the myth of Hesiod.
The father-archetype appears in the Greek Myth in the beginning as Uranus = the heaven, then as Kronos, ruler of the Titans ~ the material circuits - both inexorable against any change of the cosmic given conditions, say offsprings, finally it appears as Zeus, as god and father oft the gods on the Olymp of the Earth.
With the change of the shape of the father, the character changes from the inhibiting Uranos to the devouring Kronos, lastly tinto the love of the father Zeus to his siblings and children.
A special relation exists between father Zeus and his son Apollon,  who with his 'far-striking' silver bow avenges the violations of the measures given by his father, as well as he portends the oracle insinuating father's decree.
Another son is Dionysus, to whom is subject: ecstasy, fancy, freedom and lunacy alike and who
might be recognized as great-grandchild of the eternal heaven-father Uranos. While Apollon implements the measures of the father Zeus - like  according to our astrological 'nomenclatura' he inserts under the Roman name Jupiter the decrees of his father Saturn.
A failed life therefore consists in not being present in such moments of Jupiter's insertions, following the routines of any just important stuffs, or because inertia or cravenness already
has taken the command on the ship of life. In such cases only Uranus  can help to be thrown back on the path of ones own fate.

In the 'Great Conjunctions' in the sky father and son unite their light each 20 years, whereby in the astrology the planets(lights) are taken as traveling clock-hands. Hence on Monday December 21. at UTC 18:22 father and son were united in the first grade of Aquarius.

They are now traveling, son Jupiter for 12 months, father Saturn for 26 months together in Aquarius, the realm of Uranus, who till March 2026 is subordinated to Taurus-ruler Venus.

Analogously to a stone, falling into water, the emerging circular waves, amplified sevenfold (seven months, seven years), are the material,  called 'Septars', which provide the insight into the  the occurrences, which have to be lived. (see Döbereiner above).

Therefor the astrology of the 'Rhythmenlehre' lets the normal Great Conjunctions out of consideration. Accordingly, the point of view, widespread in the net, that the Great Conjunction of 2020 is a Great Mutation, is an error. The latter was on December 31. 1980 in the emotional air-sign Libra.

Also with the opinion, the 'actual' Great Mutation, has now happened, because the sequence of air-conjunction has been interrupted by a laggard of the previous sequence of earth-conjunctions, I cant go conform. There is a striking  proof in historical astrology: 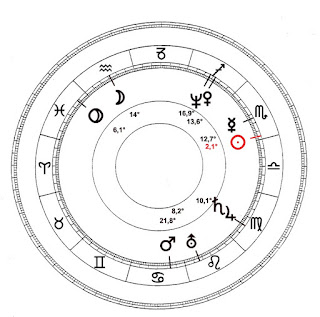 Kingsconjunction in element earth valid from 641 BC till 149 A.D.
161 years after the Kingsconjunction of - 641 B.C. the Persians occupied Athens, while it was evacuated totally according to an oracle, that had said: shelter would be found  only behind wooden walls, which by Themistokles was interpreted 'on ships'. An entire city evacuated on water? Astrologically it would be signified by city = Venus plus the sea = Neptune.
Now look at the chart above, at the conjunction in Sagittarius.
While the city was evacuated, the Persian fleet attempted to defeat the Athenian fleet. Most probably in the end of September - 480 B.C. happened the big surprise. The Persians  were defeated in the famous Sea-battle of Salamis. Look where the Neptune of that day/month is positioned, while the city was on ships and the Athenian battle-ships ended the Persian attempt. 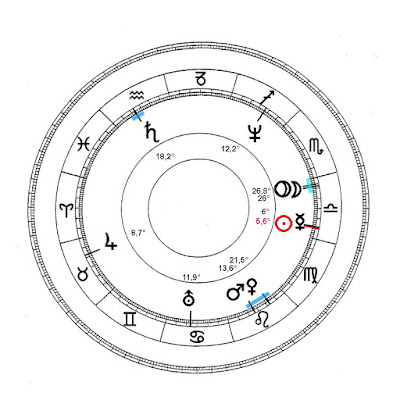 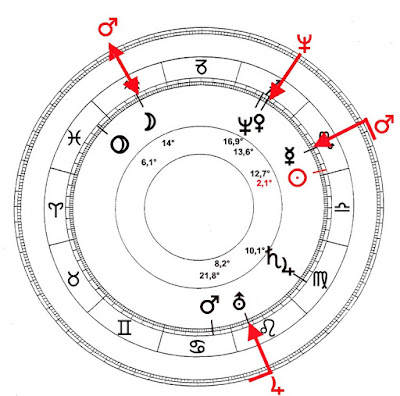 So far a historical proof: laggards don't invalidate the Kingsconjunctions/Great Mutations. Hence:
12. 21. 2020 was a little Great Conjunction.
But aside from the Great Conjunction, the presence of father and son in Aquarius is highly meaningful.
and worth to behold. Aquarius 'is' the sky, the boundless, the idea of a whole, the bird-view fom upon, the distance to the center, generally the suspension of a center, like the symbol of the ruler Uranus signifies:

A review on the Saturn in Aquarius shows the exceptional character of this constellation, signifying, concerning the determining, a change of the stage.

And our history proceeds, all bad involves a good and all good involves a bad, wisdom alone appears in the last line in the withdraw from the contradictions by uniting them within oneself in the course of the years of life.

The building-, fighting- and redemption-plan is to be found by everyone in hiss horoscope: there are 12 houses, signs and 10 rulers which want to be lived and united. But thereto no intellectual way leads, no so noble wishing. Only the unconscious faith into the innocence of the childish heart in the adult, will, being  consciously experienced, carry home.

this is the heart-week for air and water

moves over Sun and Mercury

of the Kingsconjunction in the

and the water-element on  Friday/Saturday

with the brotherly Pluto

in the fatherly Capricorn

whereas father Saturn and son Jupiter

are currently ruled by the 'fools#

ruler of the herds of Taurus

and the common bed

in the up and down

scale of the sexes

the contents of thinking of the

of the air- element on Tuesday

and beginning next week

Venus will be united with

the red Sun of the fire-element

and the red Venus of the fire

Venus always wants, wherever she is, to collect and to turn things to a stock. In Sagittarius she collects insights into eternal meaning, as far as it is meaning of and in a time.
It is reserved for the  coming generations, to gain fix concepts from the contents of the yearly transits, on the level of the collective 'Birthdays' of the four elements, which, aside by this chronicle, hitherto have not been object of modern astrological contemplation. Currently only so much: Venus + Venus in Sagittarius : insight into collections, whose object are eternal meaning in the 'time of birds and fools'. Venus + Neptune in Sagittarius: Insight in innocent faith, which has the carrying presence of eternal meaning in the paradoxes of time as object.
Here the Tao te King
of Lao Tse
is to mention

after his 'blue-green week'

in the 'right' Capricorn'

disturbed by the 'left' Aquarius

is together with Sun and Pluto

who is object to Aquarius

And here the coincidences of the week:

Mars with Pluto, waning. While Pluto is responsible for the form of life, this square points at a renewal of the form, at the new beginning of a new form of life.

Venus with Neptune - highest intensity today/Wednesday. Neptune suspends borders, which Venus labors to set. That takes effect for borders of territory and for such of personal relations and is the precondition for the making of new borders of that kind.

Mercury with Pluto waxing for the weekend. Mercury decides and discerns the things of world,  soul and  spirit by the medium of numbers and words. The conjunction with Pluto in Capricorn signifies: Mercury in the conceptional capture of the measures of creation, whereby the stringent and solemn ruler Saturn in Aquarius has to tolerate the overthrow and suspension of the formerly valid scale.