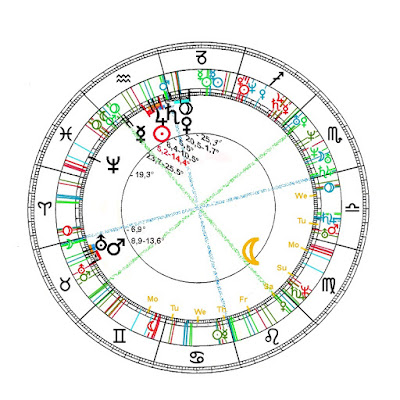 1. 27. - 2.3. 2021  0:00 UTC
under the Northern Zodiac
(0° Aries = March 20.)
and under the northern Kingsconjunctions
of the four colors and elements
fire, earth, air  and water  of the years
1603, 1802, 1980 and 1305
(click to enlarge)
"follow that will and that way, which by experience
proves to be your own, i.e. is true expression of your own
individuality.
C.G. JUNG, Letters,  9.14.1060
"Assumed, the hypothesis of the  values, by me called  as archetypes
are verifiable, then we are by them confronted with autonomous
'animalia', which command about a kind of consciousness and
possess an own psychic life and which we, leastwise partly,  can
watch in modern man, like also in the historic process of the
centuries, if we call them gods, demons, or illusions,  makes no
difference; they exist and  take effect and are borne with any
generation anew."
ibid.
"The blossoming and  burgeoning of  the individual as
experiment and a doubtful and startling work of the
lively God."
ibid.
The 'Individual', uniqueness in space and time (= in Universe), painted in the horoscope of the birth-moment, measured astronomically and noted in the order of the Symbols of circle, day, year, animal, man, between meaning and being, heaven and Earth.
And the elevated Individual:
The narrative of Herodot about the origin of the Median
Kingdom ... their uniqueness lies particularly therein, that
they  derived the monarchy not from the weapons, which
usually everywhere  prevail, but from the other duties of the
highest power, to  wield justice.  The justest is elected by free
choice as sovereign and, to give him a higher esteem as his
tribesmen, a castle is build for him, in which he has his  abode."
Ranke, Weltgeschichte, 1928, Vol. 1, p. 99.
in the astrology
like in the daily insight
nothing hampers us one-offs
foreseeing the own one-off-ness
to follow our general
collective way
whilst we look at it
as a given
against which we
as one-offs
have nothing
but
what each one-off
has to bring to evolvement
as something
no one else is able
to do for her/him
4. Week 2021
The rulers of 5 signs are in Aquarius: Sun, Saturn, Jupiter, Mercury, (heart, measure, providence, discrimination, adaption) and since Monday also Venus (territory and balance).
Aquarius, what does it mean, what happens there, also, if we don't get it?
Aquarius corresponds, after the brightness of the first day, mirroring in the waters of the unconsciousness the second day: God separates the waters under the sky from the above the sky. I say, with JUNG, separates the heavy earthly waters of the unconsciousness from the light ones of the spirit = air.
Spirit: fountainhead of Gods ideas in nonphysical shape.
Spirit, Aquarius ... non belonging to anyone.

Jenis Joplin, ASC Aquarius, as teen was hated by the super-athletes at her College and

was once in the ballot of 'the ugliest man in College' given place # 1... she had to bear the people how they were in the US-society and to survive she had to, and suddenly could,  create her world, in which the feeling Moon came home to Mama,  created it on the stages of her generation - but between her gigs - again and again - in the quiet evenings with her thin skin in the lying-shroud of the America of the Sixties, again and again she couldn't anything but the drugs to comfort her... At that, America itself is an embodiment of Aquarius, ... risen out of the waters.

And all those, who get stuck in Capricorn, followers of a 'highest' one, hate the Aquariusses, which allow themselves the freedom from the daily lies.
heavenly convention
by Venus
for Twins and Virgo
till Monday in Capricorn
since Monday in Aquarius
from earth
to air
is
from
fact to fiction
from word to line
the borderless Aquarius
heaven- air-part
of  us
without borders
shape as shock
man - wife
the basic polarity of things
Aquarius
one of twelve
joining in our
unconscious
godness
mirrored
in the unconscious perfection of
each day of
God's continuous creation
e.g. in each living person
What a privilege for each human attending this Superior week on Earths horizon since Monday , when Venus joins the reunion of the family in our collective 'we' -
with the balance and body
of the (half)world
things can happen in the world
(half) world
which happen for the first time
the new time
becoming visibly
on uppermost-world-stage
of Herr Schwab
and his guests
and in the mirror of earth
(in us)
with her fresh waters
above heaven
down on earth in the territories
of mankind
Mars the pusher
after union with
Uranus'
left Wing of the spirit
while Capricorn has the right
Wing
of the spiritual
slow
bird of time
hence Venus plus Pluto
till Monday
still among the goats
of the highest
mountains
only just
Xi
today Putin
red tie
moderated by
Herr Schwab
silver tie
on Thursday/Wednesday
Venus + Pluto
the complements
united
watch the stage
Sun and Jupiter will be united
on Friday
and  united will be
creativity with
ingeniousness
to grow silent feathers
in the left wing of time
Monday will be a blue -push
for Venus' humane associations
a beginning in dynanic of thinking
at 0,8° Aquarius
air's Mars
on the way
while Mars the pusher
pushes in the  square
with
Sun/Jupiter
the entire week
inflammation in the physical
tissue
with attendance of
the
'non belonging to anyone'
while Mercury
our
trickster and attorney
Mercury before
becoming retrograde,
from Friday till Monday
literally 'standing'
together with the
green Pluto of the
water-element
in the same 27th grade of
Aquarius
where the latter's
water-birthday of waiver
in the medium of feeling
stands since
1305
so four days at least for  getting the chance, to get an
heavenly teaching of structure together with  - Mercury-
by water -
element's coming and going
like semen of truth
emerging in crystals of soul
at the border
of hot soul to
cold medium
of reason
uniting the contradicting
elements via the
divine, heavenly contra-points
in the rhythms of every day.
Murnau, 1. 27. 2021, 76 years after Opening of the Death-Mills (sorry, German language only) UTC:17:58.
Documentation: 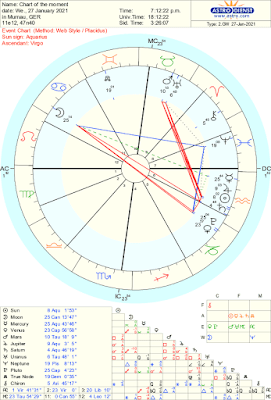