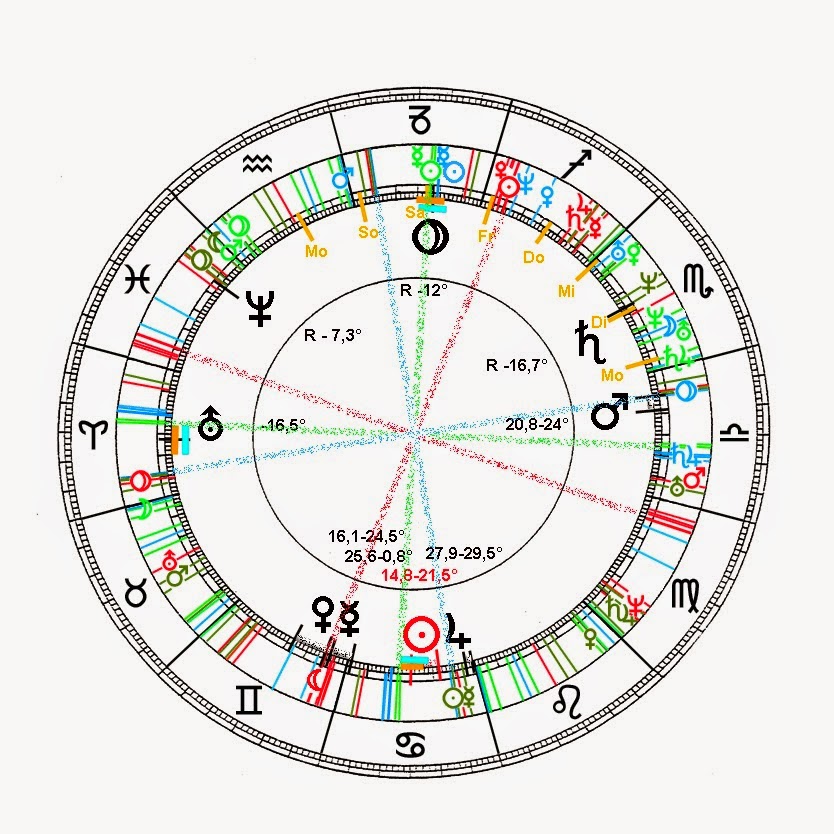 Heavenly Water Levels
from Monday to Monday
(the most important)
7.  7.  2014
and thereupon based on
Mundanomaniacs

still yesterday (last sunday) our brother and narrater Mercury - currently in his own realm - the Twins -
in the habitation of the fire = red Moon, on the magical degree of the  fire coniunction of 1603
in the outer world of the 3 (the three). There is Mercury in the home  (= Moon)  of the speedy  brightness = fire.
Has been visitted by Mercury last week in the width of the outerworld.
In the end of this week Mercury will be saluted again by the caverns and chasms meadows and brooks and streams of the Canceress.

But Venus with her herds is yet underway in the worlds of the 3, of the Twins, and for her part on the way to the home = red Moon, of the element of fire coming sunday.

This week tuesday evening historic hour of the Sun-Uranus-square 2014
What does it reveal to us?

At least this: Earth, gravity and the   light  in common intersection.
How so? Sun Cancer = Earth Capricorn
Earth is invariably opposition Sun
Sun sqare Uranus so is allways also Earth sqare Uranus.
But conciousness has to abstain deliberately from that to be able to follow the visible evidence into the order of the gestalten.
This is  what Sun square Uranus points to.

and the Moonboat
until  wednesday night  it drives the mindvessel yet throug the high scenery of the soul in which Scorpio als middle  watersign vouches that the connection to the creator via the dead can never get lost
until since wednesday morning the poising third realm in zoodiac
following body following soul now the joining spirit
in the sign of Sagittarius will be introducing the dream boat into the fourfold realm of thougt
into the realm of names on fryday
into the realm of gestalten on sunday
while the visit into the realm of TAO belongs to the coming week.