Crash at Donezk - Back to the Future 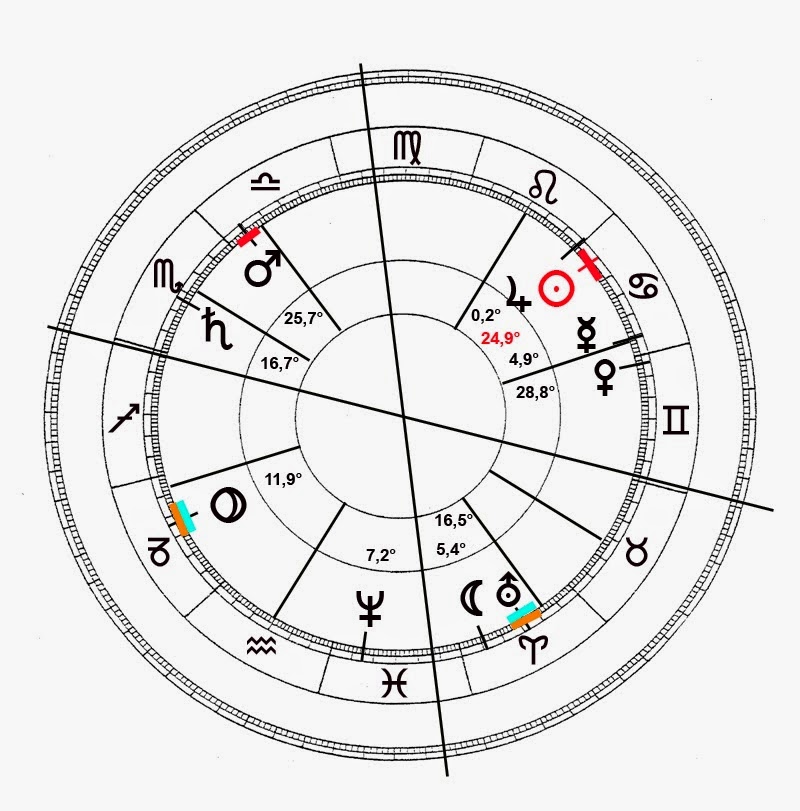 Certainly Sun square Mars, the "aggression against life" (Döbereiner), I did post it here and here.

Certainly Sun = life + igniter = Mars
In a paradox way it's also the common resonance or intersection of Mars = inception and Sun = sovereignty.
Then noticeable: Moon square Mercury, thus common intersection of Moon = beeing at home and Mercury  = beeing underway in Cancer = at home, in 8. house in sacrfice (of house 2 and 5  = existence and life).
A conundrum.
Anyway speakable is: Moon is in the 4. house = beeing at home - at home - plus Uranus = the picture of the winged beeing as the spiritual man is pictured.

But this being at home = with the family can only be performed as Pisces/Neptune do approve , mind youthe are thr rulers of house 4. Neptune however is "the child" in the zodiak = Symbol for the dissolution of all, what is shaped by time in us, leaving only what is ever: the still undivided in Gods lap = pure future of everything. Thats the meaning of Neptune in all of us.

This being at home underway, is now lightning-fast, as Moon is in Aries and Mars is square-connected with Sun the acting moments of the day. Thus sudden dissolution and set-back befor the future.
And with Moon all this refers  to all those constellated = activated contents of Cancer:


Sun = life as ability of families
Mercury = those travelling and bargaining
Jupiter (indeed in Leo but in house ruled by Cancer) = the conciliating sons
all this is here captured by Moon, and Moon again by Neptune and ... in a flash (Aries) by dissolution (Pisces) hurled into space (house 3) where Neptune resides.

Mind you:
Beginning and ending = Pisces
Pices as meaning, which is coming into the world: first beginning
symbol: the child.
Pisces as appearance of unique beeing: the end
Symbol: the (allwise) venerable of the sea
The question of guilt

has in terms of astrology to be considered with a caveat because if an arrangement under the sign of Venus or the plan of a nagation in the sign of Pluto adds up - or not - is in my oppinion allways under the ruling of the Son and assembler Jupiter in order of the father who in the shape of Saturn only knows the right measures.

Jupiter = son, the third in the triple alliance of the third quadrant in the zodiak, depicting the force of pictures and the charge of symbols, Jupiter assembles what is perceived as coincidents and so the ascendent, to my first thought of surprise, Sagittarius, the coincidence. And the Sagittarius Jupiter, as I said, is in the 8. house, formerly called "the house of death",  more recently preferred: house of "Die and become"
But by the character of Sagittarius  both is embraced: the son as demon and the son as redeemer. The former has the entrance into Sagittarius out of Scorpio lately coming out of volition = Leo, the latter has the access from Capricorn and lately out of commitment to faith.

In between the free will of the children of man is moving under their parents.
ASC Sagittarius thus would fit to the meme: drunken Kiev-Ukrainians, indeed, so Washington, "deserters" being traines specialists. Quasi Swedes of the 21. century, just frying pinched chicken ...after all now we know with such kids with such deadly buttons, why we are so dreading the allprevailing corruption and allone if the silent russian tzar succedes in cutting  in time some of the heads of the monster, not even imaginable with Barak O., we would have a saint in the presence.

With all these red buttons can we any longer  afford the rampant corruption?
Wake up Europe as long as you are existing.
The ASC Sagittarius does allow also this concept: Sagittarius ist the Sign of the (great) Hunter. His arrow suggests metaphorical, that the version, given by the russian radar reconnaissance, that a fighter jet of the ukrainian air force shot down the Boeing. This would then be the version of the Sagittarius, who lauched his arrow out of the quiver of a "schedule on denial" = Skorpio.