Astrology with the Saker


This series of holidays ending with the three bright days eventually led me to the Saker. His "Essential Saker" laying open on my desk, and his "Submarine in the Desert" reminded me once again of May 2014
and my incredulous consternation with the Maidaniotes and my consolatory encounter with the Saker of the Vineyard.


And suddenly, yesterday, there was it - this idea: Sakers first Blog, the "birth"- horoscope of his blog. And the striking outburst into this avalanche of being read. This must be  exemplarily discernible .

How does something like that look like? The astrological language names the constellation, necessary for such unexpected becoming known with the following actors- gods - archetypes:
1. a beginning, an outburst = Mars

These three, if connected in a resonance-connection called constellation, can be connected in a conjunction, an opposition, or a square. These 4 main-constellations represent the basic four elements, directions, seasons, 90° angles ... that make one whole entity in the philosophy of the zodiac.
So here is the chart of Sakers first blog (written sometimes in February) with the time-stamp of 2:19 on May 2.


2007. 5. 2. 2:13
Naples/Florida
(No idea where Saker dwells, I took a city in the middle and voted intuitively the west-coast. I got an Ascendent (ASC = the grade of heavens 360° passing the eastern horizon) of 9,5° Aquarius. A validation resulted in that  west-most Pensacola had 19° 23', northern-most Tallahassee had 4°41', and Miami had 11° 45' each in Aquarius.)
Now the outermost time-ring of the chart,  shows the rhythmical journey of 7 years, starting 2007 from the ASC in steps of 7 months. The  journey of the ASC in both directions shows the two dimensions of everything: with the sun (green): meaning, with the zodiac (red): appearance.
The time-ring shows the development from 5.2.2007 till 5.1.2014, thus ends just, when or short before the blog "exploded".
If we now step though the 12 houses instead of 7-month in 7-year-periods, then we have exactly after 7 years on May 1. the rhythmically relocation from house 1 to house 2, from the rule of Aquarius to the rule of Pisces, and in that moment in time, the above-mentioned constellation was reached.
A textbook-case, that thankfully Saker made available. And who looks again notes, that the constellation has another partner: it is Mercury in square/opposition-resonance with his  partners: the  verbally competence in the 5th house of  sovereign expression of  personal passion.

The extension indicated by Jupiter is above in the 11th house. Planets and lights in this house indicate  "anonymous meaning in the cradle" of  the idea. And with Aquarius at the ASC the meaning is "nearness to God", or is the superior or third kind of spirit (= air-element) in zodiac. And the ideas are coming by resonance as "angelos", gr. messengers,  indicated by Uranus together with Mars = opening doors, under the folks = 2. house. And the god of parsing in the sign of parsing, the Twins,  indicates the expression of analyses.
It's obvious, Saker entered his wheeler in a high meaningful moment, and what arises from that depends on what he carries with himself be it knowledge, spirit or character.


But one does not  accidentally enter one's blog.
Second idea today: Saker and me.

Also my 'Astromundane Diary' is a 2007er. (I hear the demon whispering: couldn't you have started like him on May 2. instead of April 19. ?)  But I'm sure as hell, everything has exactly it's time. So this is my chart of the first post of the "Mundanes Tagebuch" to my German speaking countrymen.
4. 19. 2007, UTC 17:27, Murnau
Mundanes Tagebuch, first Blog

Only by the way: by the first glimpse it's to be seen , that there is no outburst after 7 years, at most after 14 years, when Jupiter is reached with an extension in house 2 (= within the community) in connection with Uranus' surprising freedom of expression in house 5.

Second idea with Saker today: to look for my first Saker - experience, which I saved: I still remember
it was on the sad (Mariupol) May 9.:
http://vineyardsaker.blogspot.de/2014/05/beauty-will-save-world-happy-victory-day.html

And here the chart of the piece:

5. 9. 2014
Naples FL, 18:43
The 'coarse structure' (Master Dö) to keep the long story short:
ASC Scorpio = the image storage, Pluto, ruler of Scorpio, is in Capricorn = the rigor of the scale, in 3. house = the display of the leading images in the rigor of the scale.
Sun the gift: in Taurus = the community.

Finally, why has just this contribution opened myself to the Saker?

The answer is in something of  the moment of Saker's saving "The Beauty..." in accordance with my horoscope. This something is visible in the "transits" of that moment on my chart: 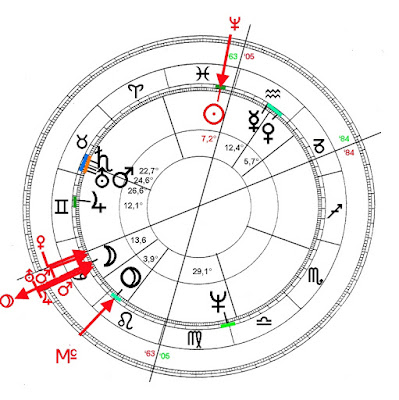 are moving in such a slow speed, that they are to be counted out, being "transits" for months and even years, activating  their mirror-archetypes within my psyche with no specific meaning for the day and moment.

The MC (medium coeli) ist the highest place, the  noon-place, in a chart. It's the place and moment, where the non-temporal spirit enters time. Hitting my Pluto means, the spirit of Saker's post enters my image-storage.
Venus-resonance out of Aries hits exactly my ASC = my essence. Meaning: personal resonance with a community, and metaphor of harmonious partition, according to Venus as ruler of Taurus and Libra.

And if you take a look at the hero we share, you will notice ...

7.10.1952, Leningrad
Vladimir Vladimirowitsch Putin
that he shares his ASC exactly with Saker's "Beauty...".
What a surprise to me in the end.

Today Saker  issued a technical warning referring to the elusiveness of the domain-registering company.
Here for the present 7 years since 5.1.2014 the chart. 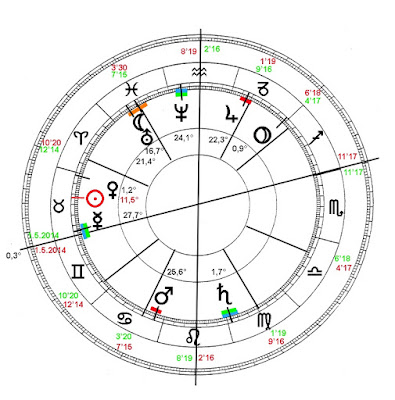 Mercury is in resonance with Neptune (green) and Saturn (blue) since July 2015, when the seven months of Pisces took over the rhythm emerging  from the ascendant the upper bow from east to west. Similar
at the lower bow Cancer took over and Moon is in resonance to Uranus, disturbing the 3. house, which represents the display. Uranus (orange) is the one to abolish  order.
The "window" for these disturbances will be open till end of January, then forget about is.