Recep Tayyip Erdogan's Horoscope - is there a Real Danger?

It's a strange coincidence, both of the top politicians in Turkey currently stinging the activities for a political settlement in ME without extremists, Recep Tayyip Erdogan and and Ahmed Dovutoğlu have birthday on the same day (with mundanomaniac): 26th of February. 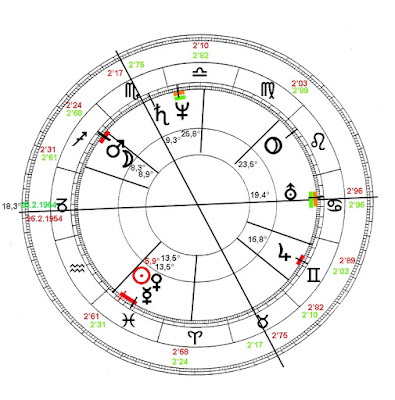 Davutoğlu is fife years younger. His horoscope is not known.

The soft and kindhearted dreamers, Pisces, comes into mind, even two of them, how is that aggressive lunacy of their actions and speeches possible with this character?

The analysis of Erdogan's chart might give some answers.
There is an Ascendant of Capricorn, with Saturn in house 9 in Scorpio filling this birth with the essence of traditions and super temporal standards becoming the key for  leading collective conceptions into time.
Aquarius enclosed in the first house  also belongs to the installation of the ascendant and adds an illegal moment ('every thing is possible') to the legality of Capricorn. Aquarius' ruler Uranus  here is ruled by the beliefs of Cancer ruling house 7(descendant sign) in house 11 concerning  the future of the motherland, whose ruler  is Moon with his addiction to national feelings.

And now the ruler of the beliefs, Moon, is in a strict conjunction with Mars, adding aggression  to nationalism. A quite dangerous psychological disposition  resonating with Jupiter's wish of expression of personal expansion.

In house 2 the Sun in Pisces speaks of large social background abilities and secret networks.

In the zodiac Pisces Sun rules the first mirror, being mirrored by  Mars in Aries like the graciousness of God is mirrored by the ire of God. If the genuine graciousness and surrender to God of the Pisces is supplanted and in lieu a conception of God is lived, then a person is a kind of time-bomb, fatal for  herself and for others, as the 'Mars in the mirror' is aggressively now mirroring the conception instead of Gods grace.

Concerning now the present period in Erdogans life, he is currently ruled by activated Mercury and Venus caused by the Twins and Libra since 2010 till 2017. In the second house this signifies a strong social presence by this leader. Unfortunately these two rulers are in conjunction with Sun and in square-resonance with Moon and Mars and Jupiter. So this man and his tribe is signified in dangerous triggering-mood, captured by  the fixed images of his conceptions.

This describes ominously perfect the current performance of Erdogan on the political stage. The whole wisdom of the superpower-actors at the brake and God's mercy appear to be necessary to quell this as lunatic as well as highly sore leader and his brother in birthday. 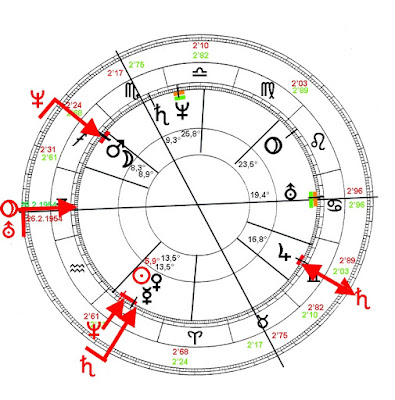 The brakes of Saturn and the mercy of Neptune in clear position against the illegal drive of conceptional  unrest resonating with the ascendant.

Also look at: Will the 'Sultan' move?