5. 16. 2016
Preface
Last week this blog and his autor has been plunged into an unexpected adventure. After posting of the last translation into the English languaged "astromundane diary" Windows was no longer to be booted. In my unprofessional unadviseability I took the recover - CD for help for booting ... it lasted - then the configuration was resetted into factory-condition.
My "Piranha" by Foxcon , already pretty shaky, was vintage 2008. On Friday then was the good by.
From Vista to Windows 10, from Firefox to Opera (and back) ... so the second hand nearly new one was configurated. Over Pentecost the installations-blues.
The data could be saved by an specialist. But all installeted programs were lost incl. my Photoshop. The latter is now newly installed. The surface of the word-document sucks - where is the highlight- button? (Now I know, it's control. A) I'm now an "open office writer).
For illustration of the astrological part of the event here my 1942-special-constellation which got the passage of Sun last week until Tuesday this week. On Monday Sun was with Mars: blind new beginning; Tuesday morning Sun was with Uranus: origin. All that referring to Taurus: saving.

And now the new week 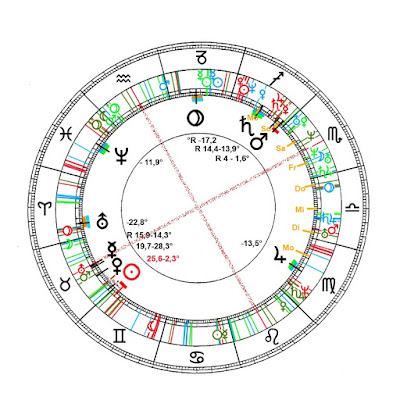 
Mercury and Venus
provisionally
are furthermore  calling - in
on the savers

Mercury's business since early May aback
now for the last days before turning forward again at 14,4° Taurus
and still  again it's time to visit the eon-relatives of the fiery element  since 1603
referrs to all ofunder the sky of this hemisphere

as to the rest
in relative enduring resonance
further the great sqares
and the great opposition
of this time
about which this chronicle has kept and is keeping permanent musing
for example that the squares suppusedly are swinging in quarter-bars ...

... while a opposition swings alternating

Moon this week dancing through the quarter of the zodiac
between 21,3° Virgo and 14,8° Sagittarius