Worldweek of Consciousness - Harvest for a Year 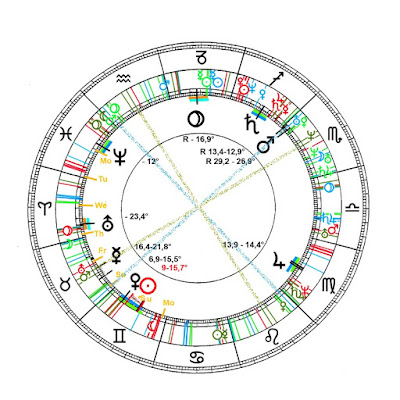 
"Consciousness = day-brightness of the psyche = one of the
archetypes of the unconsciousness ...

This not too easy facticity derives from the fact, that the "I" (Ich)
has the paradox feature to be subject as well as object
of its knowledge, otherwise therefrom, that psyche is not a unit but
a "constellation" in which are fairly other lights other then the Sun.
Indeed the subject I-personality, w.o.w. the counsciousness
with its contents, in its different contents, in its different aspects
is watched  by an unconscious, or better,  seen by a watcher placed
in the space of the uncounsciousness
C.G.Jung, Mysterium coniunctionis, § 167

affection is a moving
in the dough
Murnau, four days past May 28.
when
a wondrous Sun-Sun - square out of the Twins
with mundanomaniac's birthday-Sun
coincided
with the fare-well-party of the
Combo - Konzerte bei  Helmut 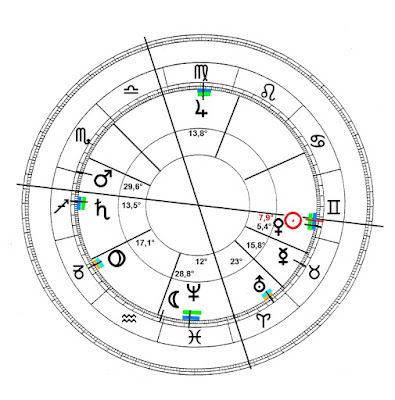 
and meanwhile
1. June
Mars again opening backdoors
for the children of loyalty
in Scorpio
the eight sign
where we  still  are souls but  - bordering with spirit -
enduring
now backwards moving

and Mercury uniting
his talk today with the relatives since 1802 in the sign of earth - Mars
at 16,9° Taurus
with the living hypothetical reatives-souls
Mars=light of the beginning
in the realm of the roots:
Mars in Taurus the trigger at the roots heads
bridges for the dead in the depths of God
for the children of here and beyond

"since this like the heavenly
stopp off, so ascends in nights/
prepared down under mankind
their day ...


bread is earths fruit, but also it

is gift of light,/ and from the
thundering God comes the
pleasure of whine"


and the long lasting resonance between spirit and soul according to their Gods Pluto and Uranus might be contemplated operating in  square of old and new, of loyalty and freedom and which constellate an opening for their paradox union among mankind


and like as usual Mooon
and the inpire of the soul