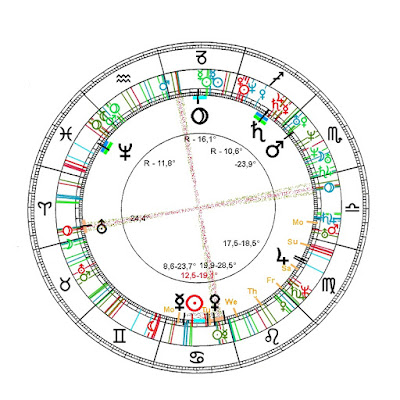 
back to the soul-layer's rulers

hereto according to my teacher Wolfgang Döbereiner the  by him
venerated
Romano Guardini:"What hence are the images? They are the basic formes of the perception with those
we order the manifolfdness of worlds matter. But this not in the way of theoretical insight but onto the possibility to find one's way living and acting. Such images eg. are the way; the thread; up; down; resp. heaven and earth, the horizontal as the figure of man's realm between up and down; the vertical as figure of the personal standing there;
the well as origin of the move an so forth. Theese images are inborn in man; not as ready appearing essences but as readynesses  following even the first touching encounter to bring them forth within (and without of;  mm) the stream of the world ..."

E.g. the metapher "aufgrund" unites in one german word the meaning of "because of" and the image of "at the bottom" - so e.g. my metapher  „rivergold“ sunday in Saker's Cafe

but now to the middle of the week:

fourfold resonances to the well

or well and
roof

it is this day ( on Monday) like mm as chronicler is with Cancer rising/ Moon in Cancer/ in 1 = personified well
till now  as suchone missfitting for any other carrier, to be redeemed only by steps of individuation following the rule of affection
...
inside of the consciousness of the given
conscious sorting in these 12 images
with the consequence of Pluto
in waiver of all other possible keys

which reads us the horizon

" ... what was just mentiones are elemetary images. On them erected are more special mor complex ones; basic formes of the world, of the culture of being, of the kind like the Elegie
mentions them: well, gate, window, pile, tower."
p. 353.


hence the chronicler describes and  reads:

each week the heavenly given  on the elementry- grid  of the eon which we share -  seemingly without natural physical senses.
Elementary astrology , the assortment - key  4 = 1, unites the quadrants in union
8 unites twoo quadrants 12 three


Elementary astrology is a pasture for all exausted minds - till now not trampled by visitors
like the Astrology of the 12 signs.

speckled is this weeks portion for our eon

and coloured the portion of our temporal  zone

Let's start with the fourfold speckeld resonances which as unconscious possibilities our fate share with the following elementary - relatives:

man is of all four - the number of completeness - compounded, like all spatial,
and we are living in it as such a sensual imperceptible "weather of collective fate".


Given the astromundane diary mentions it and demonstrates something like -
there is a culturally established organ, which permittes us  to comprehend sensual non-perceptible although actual in fact synchronisticly resonating in the unconscious vicinity of  the self,  comprehensible to self like an earmarked "X" grazing on the heaven of  one's meadow
something like the fairy tales the child is listening to
basic tales


Now to the relatives: there is Venus -visit with Sun and Mercury of the earth element of 1802 - something like heart and brain of the earth ... of the solid-genes - of their place in the lap of the fourth element = Cancer - hence in the female sphere.

With Venus it is our collective  reactive ability is wandering through the year - hers is the pulling ability producing denseness and heavyness and might , wandering with Venus ... in the elementary version called Taurus and the passionated version called Libra
and whichs relativity is excited? It's the "olive-green" relativity of the earth of solidness and rootedness

the fire-relatives are the other visit   of the week
in last week's contemplation firstly appeared
Uranus stepping into the 1°-distance to Pluto of the fire element
ruler of the hot element of beginning  called Aries at 25,3 °
since the Kings-conjunction of 1603
Pluto signifies something like the God of waiver of the ego
in favour of the species
Uranus remains with this virtual God of the communion with the
absentee in the presence
till late September.


a long lasting constellation, desribed a lot of weeks since  spring 2015
End and inition united
Word and sound

and there now on Monday/Tueasday is/was Moon the femal polar-star in the equation – with other words, in the same room with the „other“, femal light of shadow and night, is  the bright light of consciousness, of Sun ,  superior by day, embarrassed by night.
attending is Mercury, notificator and commentator
alltogether in the receiving world of feeling, called Cancer
Till Tuesday afternoon the night-light shares the resonances between Venus, Uranus and heart and brain of the eonic traits.
That might  produce a dough in which heavyness and easyness are connected with heart and brain on the basis of male and female half of things.
Then till Thursday night Moon hikes over the oases of Leo,

followed till Saturday night above the mixed realms of Virgo,
whose ruleress still shares the moisty milieu of Cancer.

Two fire-lights might be spotted by the last view. Both of them, Mars the elementary fire and Jupiter, the spiritual fire are wandering as solists  in „duty“ of Mercury and Pluto.
The former bringing meaning into appearence, the later bringing meaning into time. The former in the leading image of beginning, the later in the prudent savour of the earth.

Grate article. New to Addhunters? It's incredibly easy to become a member of our community, and FREE to list your classified ads to interact with all members. Every day, hundreds of listings get listed for free by our Addhunters members. You can always upgrade your membership and get ahead of the crowd. With Addhunters you're going to benefit from our international usages!Items listed on Add Hunters include electronics, pets, cars and, vehicles and other categories including land and property. The categories with the highest volume on the site are vehicles and property. For more details please visit our web site http://www.addhunters.com houses for sale in Qatar