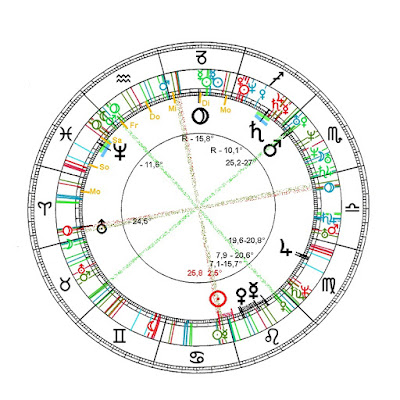 7. 20..2016
a moment of calmness watching the ongoing week
in the chart
at first sight there might strike the speckled cross
signifying resonances between
Sun and Uranus in the square of fire with  water
or of extraverted with introverted
so much for the elements in square
the quadrants I. and II.
square
between physical world
and the inward of the physical world
(which is brought about by the element water)
and here are  the physical analogies of  Gods Family
we live in on Sun's green belt
and doing Astrology
might be worship
so last week until this one

this is real poetry far too complex
for our rational flash

so let's do the first walk each week - let's visit the eon with our invisible relatives as far as our eon is reaching, as the four cornerstones of the eon are placed by the Kings-conjunctions in the four elements - so that by them our eon is oldest on the waterfront with our feelings since 1305 - the fire-front is 300 years younger with our beginnings and give- aways and concilliations  since 1603 - two hundred years later in the Napoleonic end and beginn- time at 1802 started our new earth relative-ship of staying and maintaining and  enduring and the youngest leaf on our eonic tree is from 1980 just 36 years old. It changed  1980  the tune  for Twins, Libra and Aquarius - and their rulers.

Yes, let's do it, have another glimpse at the chart - see the relatives according to the speckled cross  red = air - Pluto in Aries  and  blue = air - Pluto in Libra in permanent resonance completing  together since 1980 ...

but since 1802 there is this change in Taurus - Virgo - Capricorn and Sun is till 2577 in 24,5° Cancer in complete and permanent resonance with our unconscious fire-socket spring-sacrifice- resonance and our unconscious autumn- scrifice- resonance underneath our conscious sense-world.
And every year on July 17. Sun not only meets the resonance of our red heritage and that of our young  blue airy heritage. And in the airy/spiritual realm the Pluto wants sacrifice of all "free" spirit besides the one canon, ordered between God and Nature, aka zodiac be it Chinese or Euro-Iranian for the better of the week consciousness of man confronted with the overwhelming powers within psyche. And each 17. of July Sun first and formost unites with herself  from her birthday of the Kings-conjunction in the earth element, moreover on july 19., yesterday she united with earth element' s  Mercury.

And Sun aka uncoscious  heart was and is doing, these visits mostly out of reach for our senses, aka in the unconscious realm of us - while we are busy - together with Uranus the God of seeing the whole, like unconscious  sympathicus and anti-sypathicus.
And it might always  been born in mind: "the whole" is the temporal + the non-temporal = (Sagittarius) +  Capricorn + Aquarius + Neptune
True, nobody can focus this complexity of actors and layers in one mind-act - exept by facing it in the chart - and forgetting it and facing it again - and forgetting it again aso.
Some times a bit of the steering storm on height or steering stream in depth reaches the surface to become conscous - but this is only possible if  for the perception there is an apperceptive background with pictures in their divine/natural   order.

So the whole poetry telling us God simple secrets in twelve chapters will be the fruits of thousands of years of worshipping again God behind his  heavenly lights.


Now in short back to the week's currentnesses:
Sun pays her last days visits in Cancer calling the late children of the personal depths into life abundant with hidden reasons
Friday the center itself in the sign of Leo receives Sun its ruler incoming out of the depths of waters of sensivity into the radiating center of emotion for the birth of the soul as lion Leo.

And ruler of the soul - Sun yesterday and today met with earth- Mercury, twoo and a half days behind earth-Sun
and like Sun in Cancer is a Sun of the inward
Mercury in Cancer is the same
in Cancer the orientation  is what science calls "endogam"
so one could call the Mercury of the earth since 1802 a jewish/kasarian-type one
brain in the realm of the mothers
super-temporal Mecury of earth-element
manager of the maternal family-fortunes of mankind for
1802 - 2577


Now done with the resonances to and from our eon

a short glimpse on the aktual weeks charakters


of our time-vehicle for 1.400years
oldest part is the keel
aways carried - like the Kings-conjunction
of Saturn and Jupiter 1305
by the water-element

weal to those who know to unify the paradox of foresight and innocence cause to those the square of Saturn and Neptune gives the coming end and beginning
and from highest height to deepest depths Moon  attends the week
starting in Capricorn in the paradox of the presence of the beyond time and life
above over the third horizon/mirror in which the fatherly word mirrors in talk and number
on the neutral mercurian ways of the Twins
since Wednesday till Friday noon Moon then under the heights of Aquarius in which the race of the collective eternal thoughts of man are rooting in the spirit of God
then Friday further with Moon through the Pisces and the deep "belly-stuff" of the water element these days allow the anima - ruler of the collective feminine deeper part of the soul of man - to approach to the shores of consciousness in dream  under the alternative intimate light.

deream-time until Sunday noon - then the hunger of Aries will again knock at the dream-door of the psyche on the northern hemisphere of the earth.