Zodiacal Reflections - and the Ancestors Socket under the Consciousness 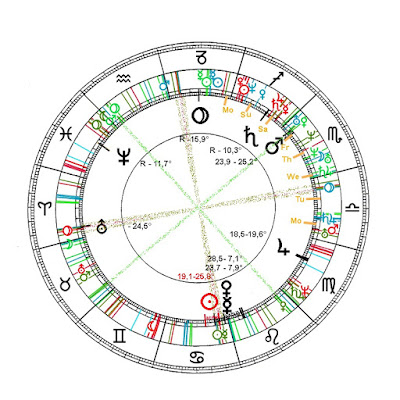 and in Leo the light of gravity in zodiac Venus


and here we are with Mars - also the pain of birth - in the realm of sacrifice
which is not to remit
as Höldelin versified: " Sacrifices the ruling want each/  was one missed, never it has brought about any good"
thus pain of the moral new start of a
- according to Pluto in Capricorn -
Scorpio canon
reflecting in Leo the charge of the heart
for state and word
cause the
responsibility of the soul
being divided  by the horizon in two halves
whose lower half keeps connection with the flesh
while the upper half keeps connection with the spirit

and now  for the slower rulers on heaven:

e.g.  the duet between childly confidence als aged- wise constraint
in the square between Neptune and Saturn
on the stage of imaginations an installation of a tower at the sea

e.g. the square-duet between Uranus and Mercury  on Monday
and between Uranus and Sun resonating at weekendwith the meaning of elementary male energy directed by Uranus
whom I call the man-God in resonance with brain and heart
of the female light and warmth

Last but no least


our community with the eonic super-temporal time-"dough" connecting us with the dead and the yet unborn followers.  At 24,5° Aries is Uranus man-God - having found his greek shape in Dionysos - whose latin name (Greek =  'heaven') - leads to his grandfather, Gaia's partner in begetting the titans.

Uranus, in Aries  mirroring the "spirit hovering over the waters",  in earthly ways, as allowed by Aries, is conquesting territory for  the freedom of religion of man.
Uranus now is connecting us with the former and the coming ones which are together with us us cut out of the common rhythmical "dough" from between 1305 and 2775 for about  1.470years, stirred according to the "super-constellations" of the  four elements.

And on this broader unconscious socket establishes, according to the conception of the old Iranian/Arabic astrologers, as well as - with psychological rationals - C.G.Jung, our consciosness. These constellations base in the exclusivly human consciousness accessible rhythm of the every twenty years occuring conjunctions of Saturn and Jupiter and in their super-rhythm of the "Kings-conjunctions" in the four elements,  in which they establish  their quasi sub-zodiac, which - that's the old hypothesis - steers our unconscious fate .

Thereby we gain in the zodiac additional unconscious preconditions along whose we are are able to wander with more than the current postulates and to prepare unknown futures.

Crucial is, the more we let us be moved by our unconscious 'management' - Neptune in heaven, mirrored down on earth by Mars - the more we get rid of the oppinions of the collective in a wise, adult Saturn-way, the more we are on the way Jung called "individuation", connecting heaven with earth in ourselves.

Now to the socket of the fire-element, carrying us since 1603 above which mankind already has on its account the 30 Years War,and all the following ones. Good to know, that with this socket currently something decisive is happening: it is about the suspension of something temporal, something having become - and about the spring of the eternal mirroring the non-temporal - that finally lead the Peace of Westphalia with which the reptile-also-man applied super-temporal reins.
Something similar is constellated by Uranus now and it would be expedient to prepone  the negotiations-peace  this time the war of the fatefull III.

Now, since beginning June Uranus stepped into the 1°-circle surrounding the  fire-Pluto of 1603  and will remain there till last week of September -  and then, after going retrograde in autumn/winter will again enter the 1°- circle in the last week of March 2017.

If now Uranus, man-God, at home in the non-temporality like numbers and principles, disposes for the sake of man the suspension of temporal entities, then there must be somewhere a Venus, a territory, reflecting in the paradox mirror consciousness between heaven and earth the paradox mirror-relationship between Aquriuas and Taurus, firmly established by the zodiac in the univerity of nature where heaven and earth are stirred into the dimensions.

Arrises the question where is the holy Taurus-land mirroring Aquarius in heaven in an earthly way, inviting the God to find a stay in human consciousnenss.

A question within the many, following the weekly repertoire, to be able to conceive the experiment man and the place for the non-present part of us in the temporality of the 12 signs.

Admitted a proposition for the heavenly Taurus/Venus: taking the resonance of Mars in Scorpio, accepting those, as non-temporal beings, which might surround us temporals, for whom the wise  heart sacrifices, like feeding the free birds of heaven all along, for the sake of man -  Pluto calls it work - long befor our individual birth into the pain of renewal.

Time  finally, after the fire-to look at the earth-relatives in the eon. Here is after Venus as earth-and air-Goddess and Mercury as air- and earth-God now time for Sun, heart, time for the annual Visit with the earths fire- bed under the bottom and around the well of the floating. Its earth elements Sun in 24,5° Cancer since 1802 - naturally territory of the elementary female - visited by current Sun.
And this Sun is identical with that of Angela Merkel 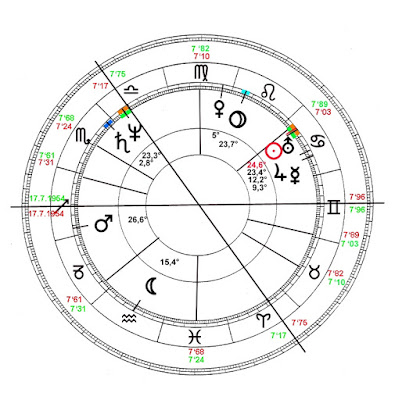 maybe by this constellation it is more perceptible, that she embodies the ruling of the feminine heavyness (earth-element) adamantly of the unconscious  socket underneath her consciousness which is motherly adapting to the superior father.

And eventually to the 'feeling' water-element of 1305 which  in the shape of Venus in 25,2° Scorpio is visited by Mars. His inception aligns with her rooting  and her parables of the eternal soul, calling for sacrificing for the persistence of the species.