Chissled Version: "This being sucked- into it is a necessary stage ... " 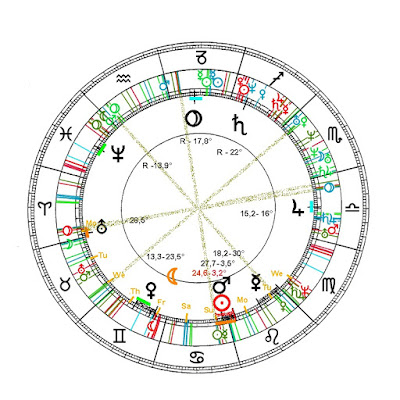 Burning the Fidelity-Gift of the Gods
within one's own Heart-Oven.
My German headline
this week.

so much for that step from receiving to expelling

and each one needs and has  this part

and 'my experience and observation by dancing the fool's dance in peaceful freedom here at my place is, that rarely somebody is shaking in, but also rarely nobody ... and before and beyond 70 nothing is better than the ocean of rhythms of musicians like Santana,  or Groover are able let for an evening to become hearable around us and  chosen dancers  shaking the radiating waves with arms and legs  sticking to pushing the body with that fire from within ...

and Sun and Mars in the expressive Leo?   Time to start (to create) an intensity of soul's radiation, or an outbreak of impatience like this and all what Sun and Mars never do: waiting for someone to begin, fire cannot wait -firends of the elements ...

And it is Uranus, man-God to me in man, adding his resonances to Sun and Mars in an expression of boldness and sovereignty of individual soul of man

And the myth-creating archetypes speak of the Sun-hero with the great heart , who's quest leads him to be sucked into the monster's  belly ... later  the hero cuts himself  out of it when the time has come ripe by killing the immortal monster for a time and a half ...
This being sucked- into it is a necessary stage of the drama told by the myth.

And fading into the week the Venus-things of roots and drama  in the resonance with the Neptune - chaos to the consciouness, but washing away all intellectual straight-jackets by Venus' 'geen' resolutions occuring in the field of information = Twins.

And in the second half of the week Mercury in Leo meeting with  Venus of the Earth-conjunction of Saturn/Jupiter. Venus the elementary archetypal female mirroring heaven by picking it's fruits.
This Venus in Leo since 1802 is a compromised Venus, reminding of  the reserves of the society gamed by Leo's player's addiction by risk.

Mercury in Leo is checking the accounts of the King. And by the dappled paths in the chart you can  see, that mighty archetypes in blue (air= thinking) and green (water= feeling) are resonating.

And Moon is on Friday relocating  from the outer to the inner perceptions . On Sunday  Sun+Moon+Mars since afternoon in the adventurous realm of Leo. 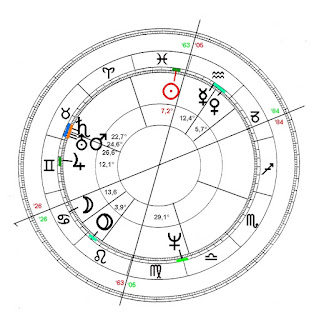 Burning the Fidelity-Gift of the Gods
within one's own Heart-Oven.
My German headline
this week
This motto at the head is talking  the "fifth mirror" in which the fire of Leo is burning below  'the white shoe' = Scorpio  according to Pluto in snowy Capricorn's land 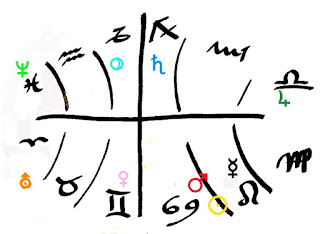