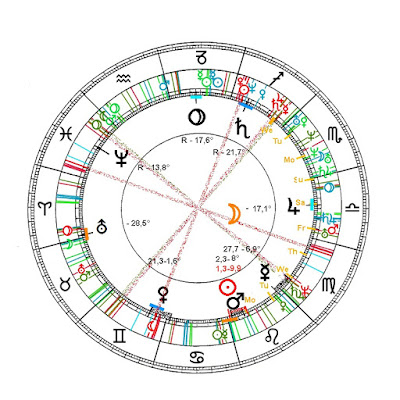 July 26. 7. 2017*
the problem our consciouness has with the emerging new
is that it has't spoken a word
like a valley with forrest and rivers wide ...
so is the unspoken future
and there is a 'someone' inside of you and me
having run down this valley
times beyond measure
and this someone might be as well an
airy person
airy but speaking inside

So, this is the stuff, this diary is about since 20o7 in German
since 2014 in English here in the Vineyard
in poets corner in the cafe

let's have a look what the archetypes are dealing to one another from middle to middle of this new week?
Sun and Mars this week as common lights in sovereign action not too often occuring Mars slowly falling back ... together they might move the  attacking force of the ruling families.


Mars telling Sun: visibility  together with me is only the first tip or shot of time cause I'm the beginner -
Sun answering : heart will be sure enough in your tip of a beginner - thinking: he doesn't know anythig beyond his tik tip but together we are invincible.

ok they are in for a couple of weeks near companions, firstly in Cancer, now in the sovereignty of families land Leo - only temporary for the northern world to realize the leisure of being alive and well - i's a privilege given only in times like this - tells the zodiac

And Venus' solid logistics and court of roles will acts till next Monday on the matters of Mercury but then will open the book in Cancer for the floating affaires with Moon.

While Mercury's airy/earthly matters of discern and adaption started even this morning with a new tapestry in his/her own reign = Virgo with all her earthly details necessary to show the beauty of temperence.

And on Monday Mercury will visit at 5,1° Virgo the Saturn/Jupiter of the earth - element and on Wednesday The Neptune of the fire, child of fire so to say.

Time for the brain to renew the respect for  pole and  equator of the most staying element
earth, whose measures are represented by the fatherly Saturn and the sonly Jupiter
or by the cross and the circle.

And after the abandonment of Cancer by Sun and Mars Moon somewhat disempowered
moves on till Thursday evening in Virgo the into the quadrant of imagination till Sagittarius next Wednesday. One day earlier Venus went into Cancer and the homes of the tribes and their families are in Moon's focus.