Miracle and Surprise in Hamburg

It was late tonight and erroneously I posted my analysis at the German blog.
Now here is it at the right place. And my drawing-program also recovered. I'll let the first drawing stay, to let you experience, comparing with my drawing, that less uses to be more.

Today my drawing program died away, so I have to use astro-com. As my regular readers know, I read horoscope of any event on the moment, when it's completed, as well as a human's horoscope is not on the orgasm of it's  parents but on the first own breath of the newborn.

Now we can read: the main part of the event was mainly  ruled by the ASC of Scorpio on a day, where Scorpio's ruler Pluto has a common opposition-"funnel", whose upper edge is at about 7° wide, with Sun and Mars, , while the distance to Sun is 2,8° and to Mars is 3,5° and the square of Sun to Jupiter is 1,4° and of Mars to Uranus is 6,5°.

So the matters of 1.  family + war = Mars in Cancer, 2. of family + central power = Sun in Cancer, resonate with their complemantary opposition with  Pluto in Capricorn = sacrifice by the state, while Jupiter in Libra, cares for conciliation in the balance between the two complementary opposites while Uranus in Aries as man-God calls from the battlefields of the new concilliated mankind. 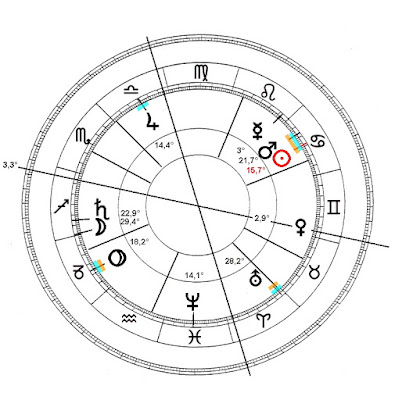 
After 1 hour and  59 minutes the Scorpio-rule of the day was completed and for the remaining 16 minutes Sagittarius had it's say, Sagittarius = good coincidence.
And the concilliator Jupiter was  now  ruling in house10 in Libra = balance of the collective matters.

And now  the symbolicly great achievement, is to be realized by looking for Venus, the Goddess under which  the material self-interest and the balance of  parties are ruled: she is exactly in the position of encounter = descendent at 2,9° Twins. This signifies, the event ended in conciliation and mutual balance.

This is the  unconscious 'language' of the archetypes, while Putin and Trump talked. How much they realized dealing consciously with the unconscious chances remains to be seen. But the archetypes were supporting the collective good in the way that all contradictions were on the table= 4 sqares + 1 opposition +1 conjunction. Time for the demons for fight and for the Gods and nature to unite.

And look where the balancing Venus of this day were at 6:26 PM: 2,9° Twins = Putin's Moon.
This is the miracle of these kind of exact 'moving with the archetypes' of great human beings: with his Scorpio-Ascendant Putin was prepared to lead the first two hours by respecting the legitime interests of his partner and with his Moon he was prepared to find the point of balance for the day.
There ar more amazing constellations of the day with Putin's birthchart. For example watch the exact opposition of currrent Pluto with his Uranus ... this man is in for surprises. 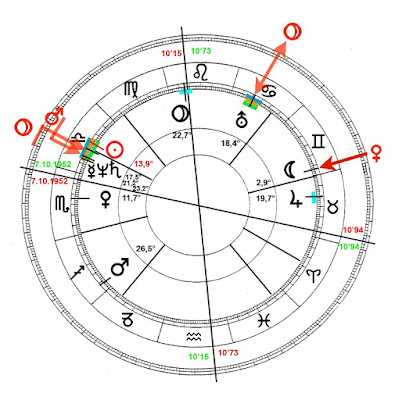 So we are not alone with our weak powers if we add them  to the powerful archetypes working underneath our hope and our disbelief.