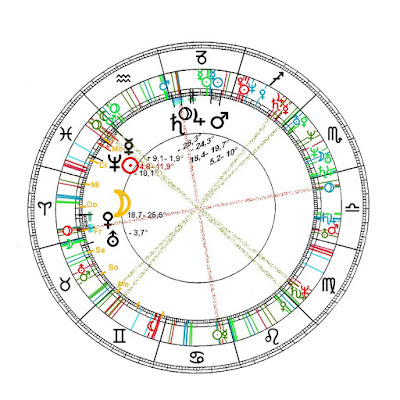 It's the "helpful figment" as which the zodiac has proved to me from day 1, 39 years ago. It gives names to facts according to their places in space and time and is about 5.000 years old.

40 yers ago, after all ,  I prayed for my prong on the cogwheel of everything.
This diary is the leading edge of what has become my prong between God his "signs and times" and earth.

under the northern sky
of our green planet

Mars six weeks in the disposal
of boundary setting Saturn

Capricorn is like a
pilgrimage
Mars in Capricorn
storm in the north
the last wave of  I after
Mercury, Sun and Venus
the inner
now Mars
the first outer
neighbor

will meet in the sixth week
the Brother Pluto
still in the fathers  'land'
and in the 7.th the father
Saturn
new in the heavenly toppler's realm
Aquarius
what a reversion

and the green element
water
aka feeling
had   Mars -birthday

Now with green Mars at 0,5° Pisces (since 1305 till 2159) it's a kind of given, a very old  one, signifying: the elementary strength of 'feeling- by- beginning'  is since then  not in this world but beyond, in a possible future. Certainly no one is excluded from , and no one can't 'buy  into' any pilgrimage under the eyes of the creator, by beginning future from scratch while still living

after  Sun and
green Mars of water-element in  Pisces
yesterday

finally we nearly lost Mercury on his deep-sea trip in Neptune's realm. I don't know what's really happening in Twins- and Virgo-offices where exactness is natural., but I feel it's puzzling. Unfortunately Mercury in this stage will 'go' retro, hence Mercury in Pisces will last till April 12. Let these book-keepers and artists of  tiny checkers spend a time in retreat and meditation.

And,  Mercury in Pisces,  for a time  lend the mic to the voices of the background.

Of our Personality, except by Venus and Uranus,  all other folks are
busy in different stages of  fermenting gone and preparing coming times,
like the peasant do in Winter- recreation and Spring-preparation.
But Venus and Uranus are bursting with spring 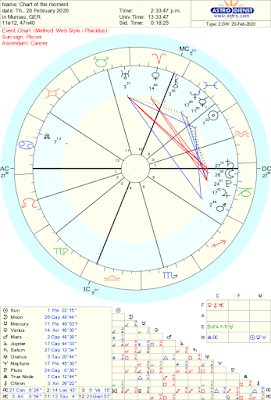