Baptism on Sunday and Dionysian Relief for Venusians 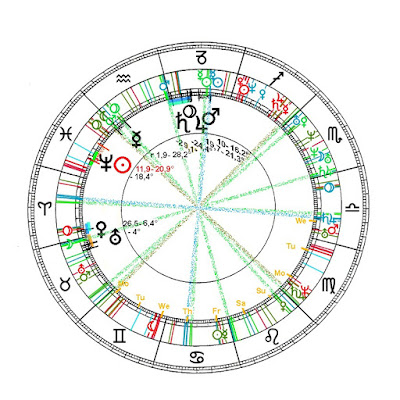 Dappled are the resonance-crosses of the
activated 'gods' of the four Kingsconjunctions
of Saturn and Jupiter in the signs of the four
elements of the zodiac.

Now, our 12 godly partial-men, what is awaiting us, what our hearts, our Sun? It's the still missing partial-man Pisces within us, the letting happen, letting things do as they are

albeit the holy - I don't know exactly what it is, what zodiac and language offer to me. But the salvation, I feel, is to scoop of the connection of heart and child or Sun + Neptune - be sure
Good likes it

one day a year
coming Sunday

without the holy,  a mature child, - not any healing comes into the world. Healing is the meaning of Sagittarius, that something of the imperishable health might be in the world as anonymous 'zeitgeist' in the temporal, turning a bigger wheel a cog further, if also receiving

and Tuesday  Saturn's resonance is mixed with
Venus' resonances

well, Mars  moving through the center of two elements of our eon . (1305 - 2157)
of the four elements this week, air first, water following directly, thinking before feeling on the 'pilgrims way' of Capricorn, occupying the upper floor of the earth-element,  in any horoscope ruling over what is  lasting.


The upper unconscious of man is,  where the 'holy figures' created the canon of the  yearly 'animals' via  dreams and incursions

This week hence Sun = heart alongside with the second function of orientation, Mercury = brain, out of calculability, in the great yearly circle of cleaning from temporal validity

followed on Sunday
by
Venus + Uranus
in con-junction

a wave of relief? Or crash?
is one
bird or clod?

and adding
Venus on Friday again visiting  Luna
of the feeling element water
at 1,8° in Taurus
granting secureness to
the feeling in this world 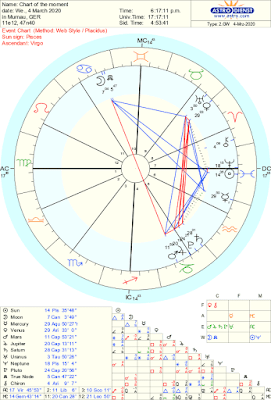