The Day the Monster Died


The immunity of the nation depends entirely upon the
existence of a leading minority immune to the evil and
capable of combating the powerful suggestive eﬀect.

Good does not become better by being exaggerated,
but worse, and a small evil becomes a big one through
being disregarded and repressed. The Shadow is very
much a part of human nature, and it is only at night that
no shadows exist.

I was three years old. But all of my later life this day was the most significant to me. Not so to my parents,  neighbors and teachers (one great exception). Anybody used to look the other way and forget like a bad dream.
From when I was 15  it was 'the leading minority' that was of my concern. 24 years later, when I had my encounter with Astrology with 39,  I started to consider political/historical constellations.
The Day to end the World War II,  how very, very special might have been it's constellation on that unique day? Here it is.: 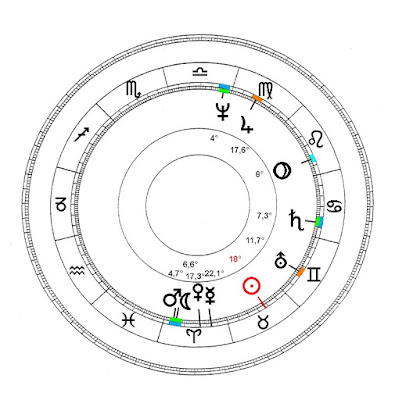 Incredible,  Mars, the igniter  in exact resonance (opposition) with Neptune, the extinguisher.
and per conjunction  Moon (the people) and in square Saturn (the state) are included in the resonance.

What does philosophy do with this finding? 2080 days of  terrible monster industrial war, eating cities and landscapes, countless men, women, children brave and craven, fighters and captives ... billions of decisions ... of hopes and desperations.

Now look, what a say the elements had on May 8.: 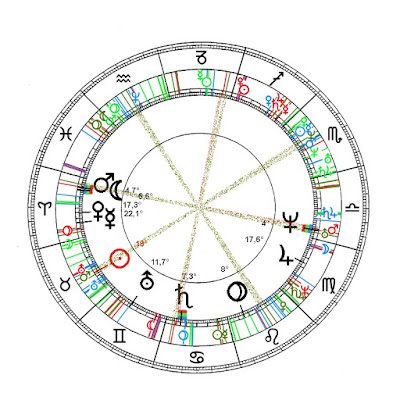 1. the extinguisher Neptune again resonates with a Mars, here the red Mars of the fire-element + the olive Uranus, the toppler of the element earth, and the cluster  resonating with Mars and Moon.

2. Sun of the day is between 16,9° Taurus = olive Mars of the earth and in opposition to olive Neptune of the earth element at 18,9° Scorpio.

So it had to have 3 x Mars and 3 x Neptune connected with one another to see that  blessed day, the gigantic monster died on the European theater of war. Mankind has to learn, take note of synchronicities like this, and to muse it's psycho/physical/philosophical consequences.

Note: Neptune is exactly at the place of the "Grandola-Constellation". (sorry, in German only). 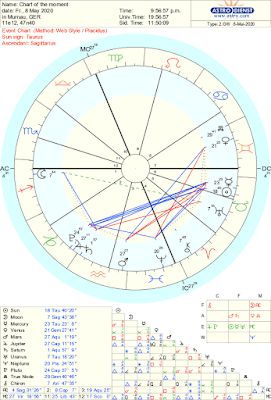