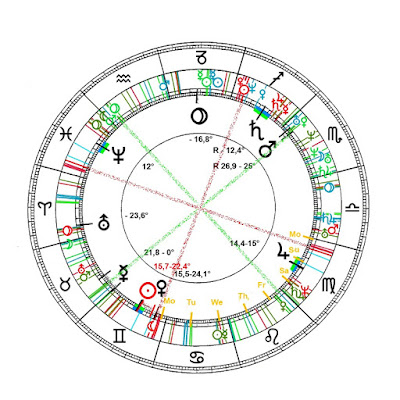 D-day by the way


so since Monday (D-Day)  Sun and Venus share  a common axis
around the center of any soul on earth
calling and gathering and uniting
the children with an abundance of advice
in the "real" reptile world of the cold-blooded physical only
I. quadrant of four
which are called into life by the Sun in Twinsand - Holy Days - holy resonances with
Sun and Venus are sharing the puls with
three other Gods or Archetyps of spirital resonance
with our multidimansionality which only by the zodiac
as the inherited symbolic key

big resonance within the four third Signs
called the mutable

given the paradox union of the contradictions by life:
childlike carefreeness
fatherly foresight
sonish confession

a last week of Taurus - serfdom for trickster Hermes Mercury
will be completed finally  Sunday night
this freaking long journey through the world of roots
of the earthly gatherer  Taurus
ever so close -to -the- center - light of Mercury
proving  the stocks of the gatherers
and full   resonance of
Mars
acompanies Mercury
Resonance out of Scorpio
Mars calls:s Start with offering
Mercury in resonance calls for ramification
for heavens sake cause only ramificated
will be with him since next week

and now an eye onto the eon
each week this chronicle provides a glimpse on the visits which the lights (Sun and Moon) and planets pay to the invisible locations of the Gods of the four elements whose Saturn and Jupiter use to unite in steps of about 200 years changing the element of union for each about 800 years.
So, according to the hypothesis since the ancient persian astrology, as objects of fate we share an super-generational unconscious identity which is detectable only by astrology, footing on the Kings-conjunctions in the four elements.

I have to confess, to me this eon-astrology is  more than a historical valuated hypothesis. I've got an invincible proof.  I always thought, the ruling Kings-Conjunctions (KC) in the earth-element might  be "more important" than those  other three element's KC's because the 4 elements have to unite on earth to produce life. Then in 2006 after 25 years of astrology I relized that the latest earth-conjunction was 40 years earlier than what my great teacher Wolfgang Döbereiner had supposed. And when I saw, that the earth -Pluto of the real KC of 1802 was and is  in nearly perfect conjunction with my Sun - that was too much, more as any needed hint in my life. Good to know, that from the beginning with 39 years, I was shure, that the astrology of the zodiac is a Scorpio-child. So here I found the answer, why my late found gate to my way lead into  the exotic enough realm of astrology.

this week now there will be two visits

all future relatives for centuries have in common with all those being born since 1980
that their spiritual element - air - provide a place, where the "blue" man-God Uranus of the air -element is located,  visited by roving Mars last week  at 28,4° Scorpio
and this week there will be with us unconsciously the bands of the soul-relatives of the
feeling element water since 1305
receiving the visit of Mars' godly initions this Week
so the proximity of the green water- Venus might be given
near to those who are near to her
with the nontemporal inventories of the personal and
universal unconscious archetypes at 25,2° Scorpio

So with Mars-pushing a beginning is to muster and to clean the inventories of the unconsciousness;  to etch the eternal images free of the temporal  film, together with the relatives- in- feeling of the last 700 years and for another 150 years until they are clean again.and also Venus is paying a visit with our eonic relatives this week:
on Sunday and Monday she will visit the "red" Moon of the fire-conjunction of 1603
Fire-Moon, home of the fire, depth of the fire if one takes "Moon" as signifying those deepest ( innermost) place, where the waters in their dynamic heavyness are gathering
naturally and symbolically


and what else?
The leisurely wandering Gods have been thought at in the beginning:
Neptun, Saturn,  Jupiter.
Latter will leave the resonance- union with the and of June, then heavenly father and child
Saturn and Neptune will be alone again together. Further with Saturn  in accord is Pluto
the keeper of life's signatures overruling lifes appetites.