After Brexit: Into the Russian Federation? 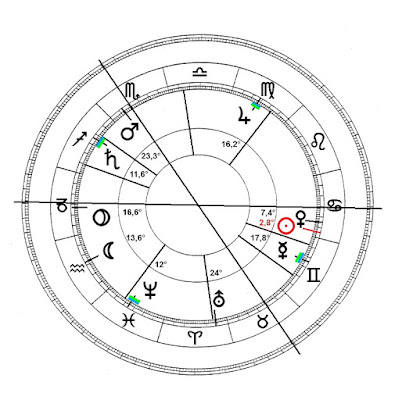 As we don't  take  the moment of conception for a horoscope
but of first breath of the ready child
so for a chart we take not the beginning of a polling
but the moment,
it is completed

It was Capricorn-hour ascending, when the referendum was ready coocked. In this Capricorn-hour entities of the top layer and of great endurance are appearing. It's the epiphany of the invisible God of  modesty which is the appropriate attitude to pass the exam of winter, polar and high regions.

And Pluto is under the aegis of Capricorn - a symbol of a moral redyness for sacrifices.

And also under the aegis of Capricorn is Moon, although being in Aquarius
but the heavenly landlord of the large first house (= appearance) hence including Aquarius, is Capricorn.
So  Moon = the feeling of the people is signifying a clear step  of conservative revolution.

Now, the ruler of Capricorn - where is Saturn?  It's the  crucial question: What is the location of the ruler of this moment - what does this mean?

The location is the house 11, which tells the answer.  The house 11 is in analogy to Aquarius. And Saturn in that one occupies the stage of lifting a ruling order and  likewise the origin of a new rulership.

And the sign/month of Sagittarius, Saturn  currently dwells in, signifies a quality of fire. It' s the spiritual fire=light of discernment, which Jung denotes as  "the son of the father" which my teacher discerned as Sagittarius - the fiery 9th sign in the zodiac of twelve.

As well moving with the Sun through the day Sagittarius is the fourth stage in the sign of an arrow coming out of the 10th sign - the nontemporal father.


So much for the ascendant
aka what it is: the- world- after
the elder east - British dropped  the- E-Bomb
against
more of the same
from Nato + EU
aka
Brussels

is the world that be hence
to be governed
by a tribe?
without any rassism
governed by one tribe?
I wouldn't mind
if they were the humble
part of them
off which Jesus Crist emerged

Well so far for the Sun: together with Venus in the sixth house signifying - in analogy to Virgo - the ruling Goddess or stage  of modulation - Sun in Cancer - the receiving Sun - tells about  - how sovereignity appears - and Venus tells abaout the roots and and the two scales of happyness and all that is governe by the ruler of 6th house Mercury and he is in a very special resonance

if we translate Mercury  = media so this moment is one of profound resonance of media with the very big one. It's the resonance since autumn 2015 between the nontemporal spirits of Neptune the child= future and Saturn  the father= de- terminal-  and  this spring Jupiter retrograd joined the band and added to father and child a third God: the son - and this week Mercury joins the resonance and in this time the referendum was cast.
But we are not yet ready:

In what kind of voices does that resonate united around Mercury the story-teller?
Now with Neptune it's resolution, with Saturn it's termination and with Jupiter it is discernment.
Three of four shapes of spirit - what a chance for mankind - used.