With Mercury to the Soul of Fire 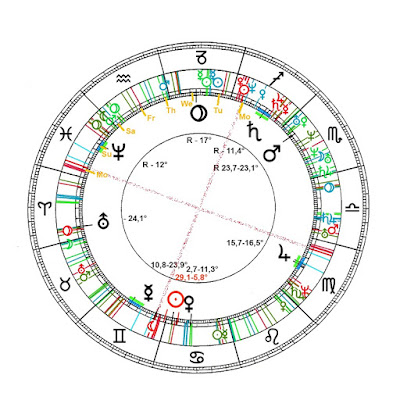 and Man  remembers the 75. return of the day
when 3 Million Germans at 3:15 in the morning
raided the Russians with fire and murder
ready for their own nemesis

otherwise it wouldn't be possible

and at weekend: Mercury's visit
with the old Moon of the fire - element.
astrologicly - established
non- perceptible by naked senses
referring to a moment of unconscious pre-structuredness
in the shape of a Moon of the fire-element = home of the fire in us visitors in our eonic space
which  according to the hypothesis of the old persian astrologers
since 1603 is radiating from this place in the zodiac: 24, 8° Twins
as the fiery essence of our greater relatives
in our common eon
ready for  rhythmical enlargement
so on Sunday the heavenly messenger meets on his way fire- Moon
over well, creek, river of the earlyness in our 800 years rangin world
of the four elements we are existing of
and here heavenly grammar:
fire = triggering + Moon =  at home in the inward of the initially feeling
so on Sunday quite something will be swinging through the soul of our thinking
without being perceptible to natural senses
only proclaimed by the effect in the mechanics of the spirit
of the earth  tying an invisible net and - noting
Twins -like
by signing what will happen in the horoscope of the week

so much for Mercury in these times this week in Twins just meeting  Jupiter
of the chronicler of the winter 1942 in his far back  in 12. house
ruling the first 7 years and all times without  discriminating consciousnessand as the spirit
hovering upon the depths = waters

all considerations referring to  the Twins via Mercury by Mercury have been shared by Sun and heart only on Monday but since the early morning hours of Tuesday they wandered into the inward - in every meanng . into the  beds, caverns and chambers of Cancer
30 days Sun and heart receiving
before then with Leo-hot heart is to deal with sending

so Sun since Tuesday morning  is  upon the northern sky in the turn to the other pole and likewise
entrance of the hearts into the fourth zodiacal sign and under the rule of water in the shape of  light in the inward of the dark heavyness of water.

while -  we are near to the other heavyness: earth-element - rule by Venus Goddess of association and the number 2 - ruler of the nourishing cattle in the sign of Taurus and of the the two scales of Libra, engl. balance - this gestalt of the balanced heavyness - now in the Cancer-sky hiking now in company of Sun - and look - as long as these two Gods walk together in Cancer there will be receivement of the act of saving and of investing quasi a time, where the contradicting -brothers are conceived under the command of Moon and the women  walking according to  the inward rules provide an alternative source of light.

then from early Thursday till early Saturday under Aquarius, the sign of
distance height and emptyness
the inner light in nearness to God