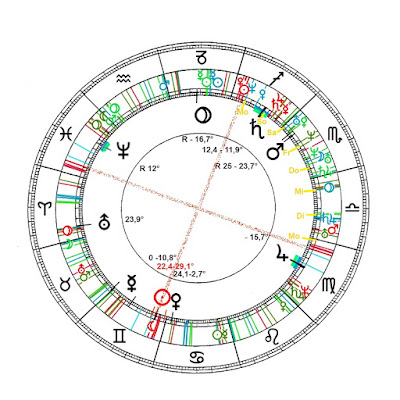 and from the fathers comming is the place of the dead in the zodiac to which is to be paid tribute
with waiver and abdication - moments of "this belongs to them" in  consumption -
woe!  over those lifes  lacking such  place
gigantic mountains of debt with Pluto are amassed by each rich one
without waiver no balanced form is to be get - locksmiths know that

and now to the week, what's in the stirring pot ?

initially Mercury might to be attended to  entering his airy home in the Twins
once a year on Monday. And he found two of the family already there
Sun  and Venus
but the latter this week is saying good by Twins

cause Venus will become essential on Friday: entry into the inner faults and chasms of Cancer
belly rules
tribe growing familiar


in the star-brain of the Twins and it's ramifications further acting Sun  further
calling the children of the hubs into the game - the neutral ones with an abundance of ramifications
for each and everyone such a kind was John F. Kennedy and is Donald Trump 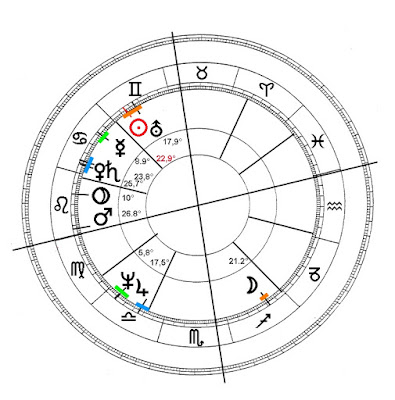 A  builder as Präsident  or a Lawyer?

and for those travelling with the current Venus and today the current Sun  it's time to move into some meeting with  our relatives in our common eon, sensible relatives in the simile of Moon, welling out of our fire-heritage red Moon since 1603 - as fire is the element of beginning  the red Moon is an eonic starter of family-becoming

And Mars meanwhile keeps on starting kinds of currents in the living for the dead thereby also changing the setup with the issues of the becoming in the invisible heavenly nontemporal dough.
And with him maybe the Hun-souls in the after-temporality travel - provided not  having   been entirely dispersed - and how they might be entangled again in pre-temporal matters if beeing to near to the funnels into time.

while Jupiter redraws his resonance slowly
to let Neptune and Saturn for another while
resonating together alone in the nontemporality
And Uranus here at the edge of the contemplation - now solo underway - in approach with the red Pluto of the fire element and keeping the entire month in his vivinity - so it might to be said: this summer the man-God is walking in the radiation of our fire-ancestors and our coming fire-children in the Twins and for the soulful connection with them so that all time may be enough beginning.

You can find Moons steps in the chart the since Saturday morning.