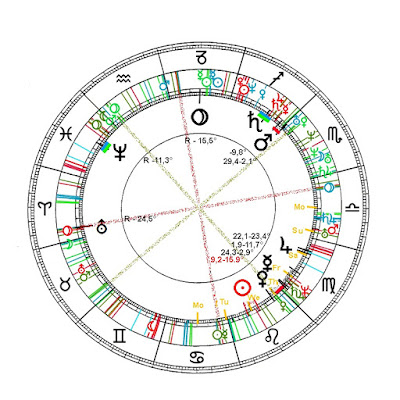 what likewise has the meaning that in Taurus,
as far as culture prevails
God of man has not yet arrived in the consciousness
of the cities and metropolises of the world

and when it had arrived
in the last Uranus- cycle
- it was 1935 -
Uranus moved under  Taurus
or into the culture-park of Europe/Japan
not being allowed for and hence persecuted
because not man was required but only Germans or Japanese
and is Uranus envisaged even today? ...

Uranus is the archetype of obsession by the strongest force/light existing for the psyche. Obsession by x ... God ... Fuehrer ...

as an Archetype of God in us, whom we are not conscious of


Heaven with the zodiac - as the home of the "sons of God" (and daughters)  is the old heritage we humans should attend to, like mundanomaniacs, adding the art of the soul in  which the symbols  order the cosmos for the purpose of psychic hygiene. Man has to deal with strongest unconscious  currents which like on  lanes of the mystic parallel-worlds of the astronomical Sun-family are drifting in and around him within the milky ways ... and to the wise ALBERTUS MAGNUS ( around 1200 - 1280) were given the words to find this place in language:


For the weekend the mystical overall picture becomes a lot more solid: Venus then in Virgo.
But till then Venus remains still in Leo, still in the danger of reckless spending: Venus in Leo =  the reseves are enthrusted to the ludic drive. That is the eon-fate with which our northern earth - share is delighted since 1802 - where only consciousness helps towards the unconscious drive, to establish the condition of unlimited indebtedness, which we are extradited to,   Today on Wednesday Venus moves over this Venus of the earth-element of 1802 - a special admonishing - day for mankind - this Wednesday.