Uranus and Something of the Chronicle

Stirring in me  Uranus in Aries and anywas Mars obviously has got a hold on me since last month in I ask me what is it, that will be learned, this time on my own body, what I learned intellectually with my master Döäbereiner 35 years ago:

It' always blind impetus in which Mars appears

If, like with mundo *February 26. 1942,  the brisance of Mars as igniter cannot unload in an isolated way, but only in the fatefull connection with Uranus' asymmetry and Saturn's symmetry, then there is many a thing to marvel since 2010 when Uranus went into Aries. And to watch how Uranus in Aries is mirroring through all grades of Pisces

Uranus is the asymmetric, the left "eye" of God, like Saturn the symmetric right one.
Behind the bought globalist  "Democratic" " Left" in the world, with HRC running for president   the US Deep State with it's proxy-brainwash-institutions called $, career, sexual-power,  is lingering and, now revealed,  seamless merging into the republican tissue which equally deep down also roots in the deep state.
Reason: the great American families united in stride in a kosher strategy, execised since thousands of years, always serving two sides, cause, seen cosmicly , the deep families, alas and thank God, are in partition forever. So the earthly remedy is Mercurius, mighty God of the higher three,  spirit of earth shuddering Faust, when he invoked him.

And in real existence, what is on offer better than the worldspanning jewish families with their jewish mames and with their mephistophelic smartness planted in yearthousands of education and discussion
and with the rule to marry endogam or be a traitor.

the three.
The three however is also smarter than the four - but only  world-wisely

The four is living in  water, Cancer, and knows the depths of the inner and the time.

But the three  is ruling the world in the shape of the two branches via their age-old Families-nets - who on earth has comparables.
This seems to me so shure like that we are breathing one and upwards the air is getting thinner.

Uranus in in mundo's perception cosmicly = heavenly/planetary man-God in the upmost little room in man, in the free flying of thought, nearer to God Almighty than to man.

While the family-welth, managed by the Jewish banks in NY propagates its "global" deity:
"The best government money can by".

It is revelations time, man by electricity and pain, Uranus in Aries,  blind man, becomes - - - seeing at last.
Something like God's love mirrored in God's ire, crying out of the newborn hungry life, becoming hunter and cutter of the sharp edges and teeths  having been identified in the shape and rythm of Mars by oriental spirit and perception -

Uranus, recognized and lord of Aquarius, in the realm of air beyond the confines of the star. This power to bring about in life, spirit beyond confines, engel alcohol offers help but finally reveales as demon - Max Beckman and his angel Quappi, eg. found a way more beautifull, more dared, more  deliberate.

Each poet tries it, in sound, image and word, prophets try it, Aquarius rules a realm at the fringe of time.

Chronicle early November 2016
And soon at Thursday Mars' association with the blue   air Mars of 1980 at 0,3" Aquarius.
This doubling provides the double blind break through of a new way of thinking. 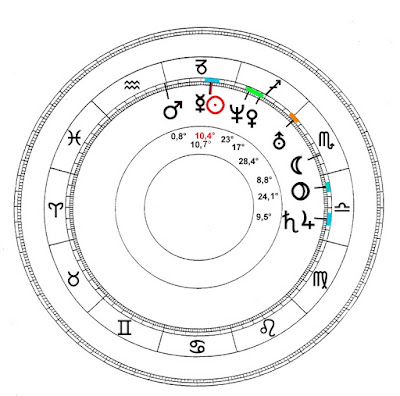 Chronicle 4. 14. 2017
on Friday today
my heart now
to pray
chance to shine
for human ray
over world and time
below the northern sky
to feed the doves
one spark
might satify