The Sacrifice for the Fathers and those to Come 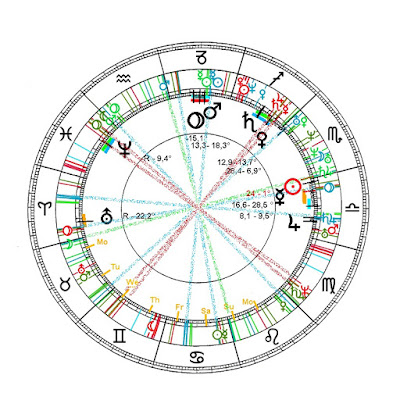 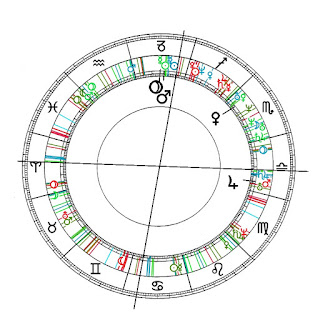 and, crucial, the affected Moon himself  is situated in 1. house
in which every he and she is delivered to the blindness of  own impulse 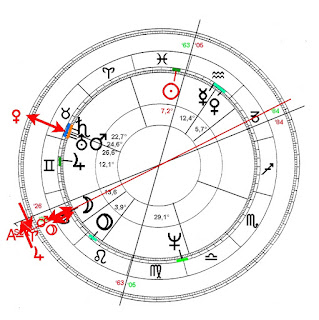 Aries-blindness, "main thing gas". And the old astrologer cant escape. Too much gas during reset:  2 pinpoint scratches in the varnish of the bumper of the rented car : repair charge 500.- .
But days later looking on the  entire constellation: what a massive amount of Mars- energy it was loaded with to unload beyond in Capricorn and in the two square- and the opposition's  - direction  each of them receivers and senders to unite with in the paradox way of mirroring psyche in matter.
And mundanomaniac is glad to have this hellish brisance released at an half-high natural stone-Wall in a step-by step- tempo.

But when the news with Motorola assasination appeared and the loss-pains were setting in, a thought
passed mundanomaniac's soul claiming what a shame of relief, to be released on such a cheap fare like yours truly compared with the hero.
And here he is, the proven hero without ascendant and with Moon placed in the middle of the day and in red "his transites" on his last day: clearly he was sucked into  some synchronicities. And "coming home" = Moon  is agitated badly by Mars and Pluto in square. 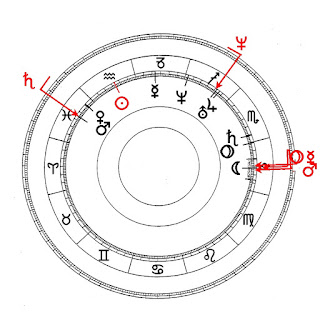 And following  is the current week:

the soul-warm Sun will complete her migration through the air-realm of love on Saturday night in the sign of Libra, symbolizing the twos scales of eternal merging of the sexes on the horizon of time.

and till Saturday 3 last days of Sun in Libra with the heart in the liberty of enthusiasm
for the art of keeping balance.

Talking of Mercury
1.  our "talking"-God beginning his race in Libra - the balance in the square with Mars + Pluto like in Motorola's death-constellation, signifying the intention within the event;
2. today on wednesday Mercury is running through the resonances of Uranus in Aries receiving a spark of human revolution out of the east.
3. ending his run on weekend where Sun was on last Sunday/Monday: at the "blue" Pluto, the sacrificer, of the air-element for our aeon, and moreover in opposition with "red" Pluto the sacrificer of the fire-element of our aeon and moreover in square with Sun/Mercury the creator/talker of the earth element of our aeon.

Now on Venus:
she the Goddess of rooting, weighing, satiation and union moves this week free of outer resonances into the first quarter of Sagittarius,  where the unknown orderer orders the fitting parts in heaven mirrored by Cancer.
... on their way with Venus'  our social  instinct and our intuition for balance will meet a firy-time:
on Saturday Venus unites her potential with the "red" Mercury of the fire-conjunction of our aeon. Something like a union with fiery tounge of our aeon talking at this place 4,9° Sagittarius since 1603.
Now on Mars:
with him our ire, impatience and hunger. God of blind holy and unholy beginnings ruling Aries with Uranus in it.
Mars through Capricorn means traveling through past of time likewise the not-yet-in-time-determination for  coming future. Mars the trigger  currently unites in a two-weeks-wave with his brother Pluto the self sacrifacer.
Now on Jupiter another brother in heaven  spiritual ruler of fire-sign Sagittarius with the blessing of "the right act in the right time".
Jupiter moves resonanceless with the current constellations
but current two weeks  will see a mighty virtual encounter: the "Blue" Mountains of heaven of father Saturn and son Jupiter in the aeon of air element since 1980.  In this virtual constellation measure and fitting -time are united for an aeon of nearly 800 years since 36 years at 9,5° Libra in square with "blue" Sun/Mercury at 9,5° Capricorn.
About Saturn and Neptune:
heavenly  father and child in a paradox union = square of beyond - consciousness and name in time
Their swinging in square since monthes now slowly is fading out ending in November
next week union of father Saturn and Venus