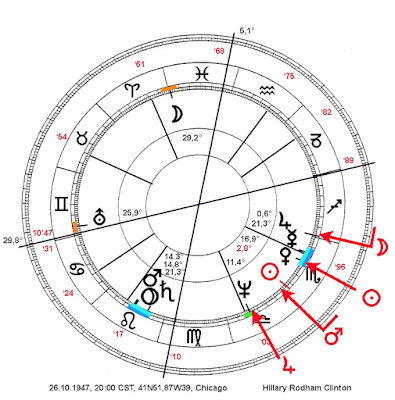 She is owner of three horoscopes in the public appearence, I favor this one. Let's dismiss the red thansit -marks for a moment:

She like her William are lawyers. Lawyers are where stride is. Trump is a builder.
Twins  is the "natural" arbiter like in the numbers the 3 above the hostile 1 and 2. But in capitalism the lawyers are hijacked by big money.

Like lawyers are the public witnesses called medias hijacked by big money.

Hillary is a hurted and dangerous woman. She has suffered the lowest public exposure and is by Mars/Pluto forced to unite agressiveness = Mars and zealotry = Pluto...
and this in a near connection with the appearance (3. house) at the top of the prey-chain = Saturn in Leo.
Dangerous per se is not a constellation, but an unknown constellation, like an unknown tsunami.
In a time of unknown astrological tsunamies astrological agnosia one can only hope for a divine marvel  lasting in the time of the reveleation  buying us  time for our species to find the way to true civilisation in repect of the opposite.

The red transit- marks now show the resonances of the day with her traits,  my take is:


1. it's a Moon coming from Pisces objecting here extension of personality
water resonating with fire
2.  it's Sun pouring  = Light on her Venus = folks sharing her wealth
where a Venus in Scorpio has to unite the waivers
3. it's Mars' rage at her heart coming from Capricorn's tight measures
4. it's  Jupiter's  splendor associated with her dissolution.
So, this is the reading from the buoy up there, as the height is mirrored by the depth,
but the consciousness is a middle kind of horizon ...
And not being conscious of a high / deep trait is like  = blindly being it.
Only consciousness allowes to guide fatal traits in a civilized way.