What a Moment of Reconciliation is "in the Cards" 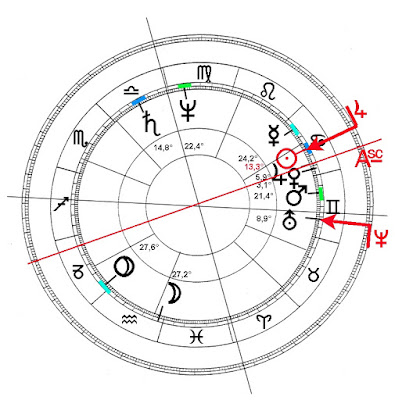 as to the Moon of the people of Amerika being guided by Aquarius according to Uranus in the 6th hous in Twins. Aquarius originates the lifting of all local constraint and comfort in the fault of the female sphere of the family in favour of the sphere of human spirit above division in polarities.
This is the equivalent to America's unconscious  dream of wordwide humanity in the selfish claim of the 6th house.

Now this ruler of the people, Moon receives strong resonance by Neptune out of Pisces. It is the dissolving resonance from the depth wetting the  wings of the US-Eagle, knowing humanity only according to own interests.

Further: the Sun of the American man representing the gold in the vaults of the American families
receives a resonance by Jupiter in Libra. Jupiter represents the ruler of the unknown unknowns which can become known by accessing the  Ascendent of the Declaration of Independance ot 1776 in Sagittarius. It's a reconciliatory dough, America was baked of. Sagittarius provides the full oversight and knowledge for the right time/place for everything and everyone.
An Overseer from the scale of fairness = Libra is compensating Sun in Cancer's family- and dynasty-centered blindness for the fair part of others. The Pluto in Opposition to Sun close 1,7° near her is placing a similar to Jupiters bet on Sun: "overcome the self-centeredness."