To Vladimir - Like the Genius workes with the Gods

One year before, one day after, this diary was posted

...after the treacherous attac of the US-"coalition" on the SAA on September 17.
Putin answered on September 20. with three missiles pulverizing the   secret control-and command-center, taking 30 Officers out of combat..

1. Look at the fiery constellations Putin worked with: for about 800 years in 1603 the Kingsconjunction in the element fire happened. The hypothesis is, that that constellation is "remembered" by our deeper elementary  layers underneath counsciousness, or simpler: archetypes dont forget.

and look what genius Putin caught: because he spares knowledge for the right moment

compare with the weeks chart Sun = vigor and Mars = attack, are in "square" = dominant resonance = adding in paradox unity

and look what firepowers he used: it is Sun and Venus of the fire conjunction signifying the vigor and the connections of that element which is the starter of the four.


And look at the air/fire/earth square he set his Venus -mark on in the elementary landscape of the zodiac. Venus always markes the place of easyness and gravitas by her rulership of   earth Taurus and soul  Libra aka air. And what she resonates to on September 20th is firstly the "blue" Pluto of the air element which is in opposition with the "red" Pluto of the fire element and both they are in square-resonance with earth's Sun and Mercury. 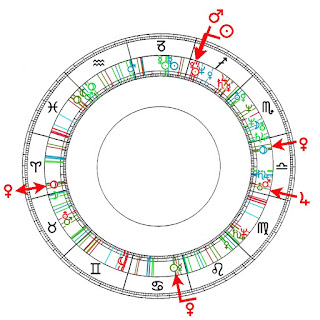 2.  On Oktober 2. Putin signed his decree, referring to the common waste management of plutonium with the USA, declaring, the contract is suspended in connection with the "fundamental change of circumstances, the threat to strategic stability as a result of hostile actions."

Look at the constellation Putin again worked with: This chart only displays the
quick running ligths and planets of the day, which reflect the genius' intuition attending the gods or archetypes in the unconsciousness, as they have left their "fingerprints" in the Kingsconjunctions of the four elements.

The blue air- constellations, the green Neptune and the earth Uranus unite
spirit, feeling and tangible reality in a historical way. 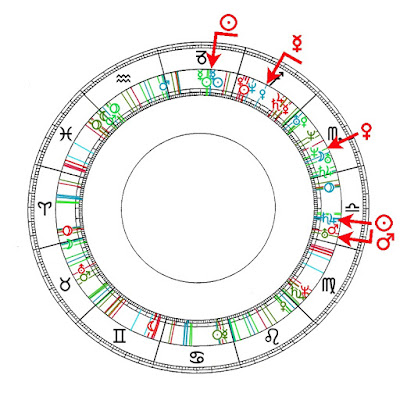