On Vladimir Vladimirovich and the Mysteries of Libra this Week 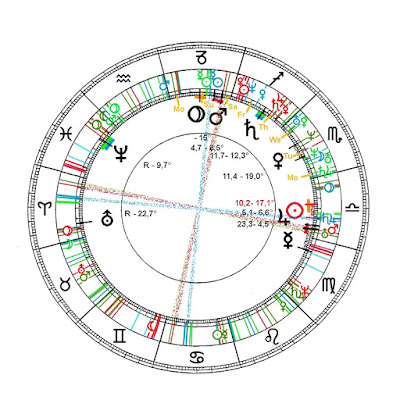 
The power of the archetypes
will never be more as precisely experienced
as  in the moment, a Work has been finished
ore safed or published,
being looked for in the horoskope of the autor.

It is indisputable that every circle pales a naught, a void in the center
and as nothing is without it's opposit
a circle creates
a center "without" a circle
which is definition of Sun
and 9 Planets dance the eternal dance in 9 Frequances
and instead fo Earth
Moon receives families radiation and -
big mooves of the three W
water women world
helper for man
by the creater
now water in the order of the zodiac
is the fourth element
equaly in the order of the zodiac is Water
mirroring heavenly fire
which is spirit
so Cancer is
mirroring Sagittarius
and had till last week the Carpet of time with the then inwofen Mars
no Mars is inwoven in the
carpet of Capricorn where brother Pluto
keeps the gates of the eternal underwold
which the womens goddess
uses to pass down and
up then again
and brother (in Sun) Mars appeares in a sudden speed-up like man experiences in birth and death in the first house of the yonder where the clouds and the birds are watching like a father his daughters fate in Capricorn and with Mars' accelerations in resonance is ruling
in Libra brother around Sun Jupiter
and at weekend speedy Mercury
mirroring gods names
as wife's father

and dreamgod Moon's hike through a quater circle or the zodiac this week starts in Skorpio in the sign of the high autumn and ends coming monday in the entrance to winter
in the polar Capricorn time which keeps time in all variety rotating round as a resting pole
and dream might bear all forborn but usefull stuff which never leaves the "collective" dough we are cut out for only one time  in all time
and the not-appearance of usefull stuff, deposited in unconscious in the light of "knowing" = in the bright daylight  = Sun -
but deposited or "ignored" doesn't kill stuff's energy - so Moon is  kind of God's second chance in us - kind of build-in-ratio of pictures in the mirror of feelings - appearing each time and in the light of heaven spinning around a pion mirroring  in our unconsciousness called  Sagittarius in Cancer - and  tries to impress the consciousness in any possible tricky, sometimes desperate,  way, to keep us befriend with the message of the brothers and sisters of God - impressed by the right to laeve fright - by a sudden appearing of order and love out of feeling maybe out of  a tiny tiny psychoid  pion living in the now with the eternal scandal of temporality
so enough reflection of religion  mirrored in physics.
Bottom line: At Libra something happens what has a necessity:
this week it must be a fruit of love as a blossom of faith, cause Venus is hiking her godly way through Scorpio who keeps the "no" in any conceivable entrance- dealing for mans generational sake
and in that area passig,  that filter of,  according to Venus' = tho two -fold - forms  are  appearing the two somethings of this week:

In the order, whose center is Sun
Earth is spinning
encessantly on the green belt
of the nine planetary spheres
Visioned from Earth Sun keeps moving in the six'th mirror
of zodiac in which's call-sign Sun calls the children of Libra those with an abundance
of balance onto life fiting-for-the-mirror of  the scepical nourishing Virgo so that might justness being advected into the world like with
Vladimir Putins  Sun on the 13,9°th
of 30 grades of the Libra since 64 Years 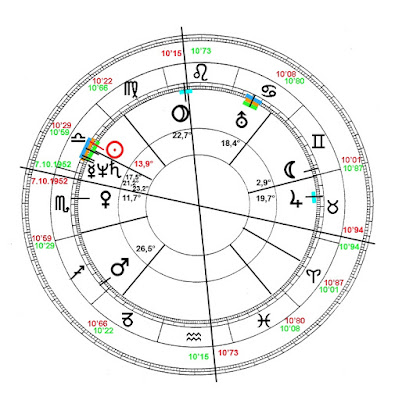 
and on the wide ways of Sagittarius is Saturn
in contradictional union
of father with child
or of word with sound
or of Saturn with Neptune
As for the difficult conceivability of the Pisces-archetype C.G.JUNG:
"as a special case of the preciosity difficult to reach is the child-motive of extreme mutability
and takes on al possible forms ..."