Sun and Mercury in the Green/Blue Cloud - three Authorities 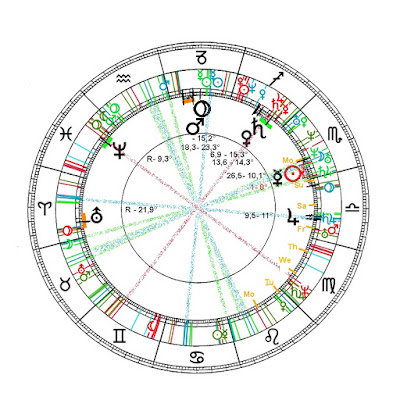 
To pronounce it bluntly: who pronounces the Titel carries the ladder. 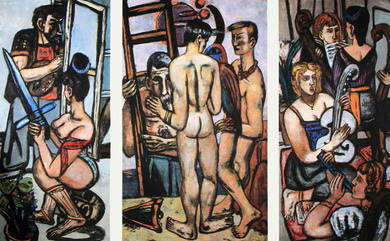 
Horoscopes display an image of the unknown Godnature. They display the canon of "archetypes", original collective images = lights and Planets of the Sun as tools of God according to His 12 Dharmas.
The christian philosophers of the 13th century, with them  St. Thomas and his teacher Albert the Great as well as 200 years earlier the great Arabic sage and philosopher Avicenna (I'bn Sina) and many unknown thinkers all they saw that God is guiding his world by Suns and their Planets following His rules.

Since 35 years mundanomaniac is exercising in the comprehension of the Dharma on earth
according to the canon of the 12, symbolized and read by Animals Men and Things. Musing them thoughts appeare like: man appeares among animal range things range and spiritual range on each  the three stores in each cosmos
airy down in the base of the elements as Twins
earthly higher in the center = soul of the elements as Virgo
airy above under the roof of the spirit of the elements as Aquarius
since next spring for ten years this blog is the open chronicle of an attempt to do a reading in understanding our God's weekly breaths of his Sun's family projected on Sun's green gem our patient earth

since 2007 an attempt to do a unsuspicious mans' cronicle for the northern hemisphere and with this constellation the weekly chronicle was originated on Monday 2011 2 7. 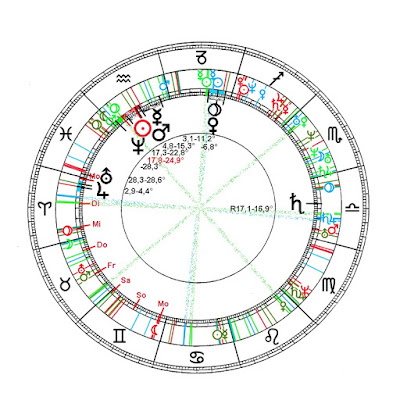 First weekly chronicle
2011 2 7 - 14
Consider the symbolical complex of Moon, as  lord of Cancer, the Week and number 7 and four times 7 = women's canon.
Moon on this Monday of first weekly entering:  Aries = new beginning for the 7

To the collective of nature is given to breath in this requested Dharma or, but only men can do that, to do the opus contra naturam according to the bold device of the consciousness (originally that of melter and alchemists): "ars perficit quod natuta relinquit imperfectum" (art copletes what nature has let incomplete) comprehending in the ways of nature

One of the arts of Gods nature is the knowledge of the shining wheels slowly traveling as light points in the dark of the sky , slowly turning along and above our hemispere, showing at the same place in the twelve months of the year 12 different monthly images mirroring in wherever is water and eyes.

Dharma of the pebble
Dharma of man

Right with man straight away it starts: the one splits into two, in male and female, in and out, young and old ... and does't stop to split and split  - should not to unite  be of nearly equal  neccessity
in the dough, we are cut out of, that a liveable possibility might emerge according to the principle of the least effort.
So incomprehesible for our left brain half   the symbolic charge is of the a-sensual heavenly rhythms so incomprehensible are for the right brain-side the mathematical conundrums of  the multy-body-problem. But the right brain - side is the saint, the  physician, the artist in man.
Maybe one can say,  left side assorts the day for us, but the right one the night. There is due the union of opposites. Left half rules Sun, right half by Moon. And who lets the Sun shine at night should keep an eye on Dharma, and Dharma on him, like in the opposite he, who keeps Moon shining at day
instead of the Sun.


so come then you sight of the week
where to start where to end
we've got the whole
no ascendant
shall it start with Aries? Or Mars?
shall I start with the beginning?

or
do I start with the center
Sun in another week of union
with Mercury
= heart and talk
Sun free of additional resonances
completely submitted by her
daily giveaway
together with the genious of speaking
of the archetype Mercury
Giveaway of what?
Sun calles with her rays off  Scorpio
out of the human dough the children
with an abundance of
profile = waiver
whose magic of abundance of form
workes by overcoming of matter
and by unwinding the void
as circle
now: talking our aeon
of us considered
as of  four elements

Sun's children of giving
now together with the children of
names, speaking and marble
under Mercury's call
Twins airy brothers
and their earthly Virgo sisters
in a week like no other in the year
"green-blue"
Sun + Mercury visiting a coalition
of elementary Gods of
the aeons  of
water and air

when Sun in transit of the "green" Saturn/Jupiter
in the way of the giver in the center
entered this week in resonance
to the "green" 'mountains' of feeling
this happened completely in our unconsciousness
memory
uniting the feeling of
heart father and son
in the nontemporal dough
of the water aeon since 1305prepared to keep the Dharma of our deep feeling
for another 143 years
by waiver of other than the "green" Gods
in the sign of Scorpio
which is prepared to weld the soul
with the spirit of God
by receiving the body
in waiver of others
like through the funnel
which's nozzle reaches from beyond
into the right time
and with his seven-league boots also on Monday
Mercury visited the "green " mountains
authority of the water- element
since 708 years
in our inner heaven
at the first grade of Scorpio
but the "green/blue" cloud of water and air
Uranus/Moon/Neptune
will be met by
Mercury / Sun
between 7,1° und 10,5° Scorpio
so unknown resonance-wells for for the concious mind in every "me"
never been introduced never been a possesion for  human mind

Now no more procrastination for Mars in his run
in Capricorn ruling Uranus in Aries.
double paradox:
forcing the appearace of  inition
in the  beyond of time
before and after
on the battleground
of man

while Jupiter for a second week
unites his vibrations
with the "blue" mountains
the authority of the air element's
ordering "blue"
Saturn/Jupiter
in 9,5° Libra

Such like I have found the game plan rich of aeonic fate - three elements authorities in one week - an outlier week
In this week ready to attend "true believers" : Uranus the heaven having to reflect Neptune = certainty,  in the first mirror of the zodiac.